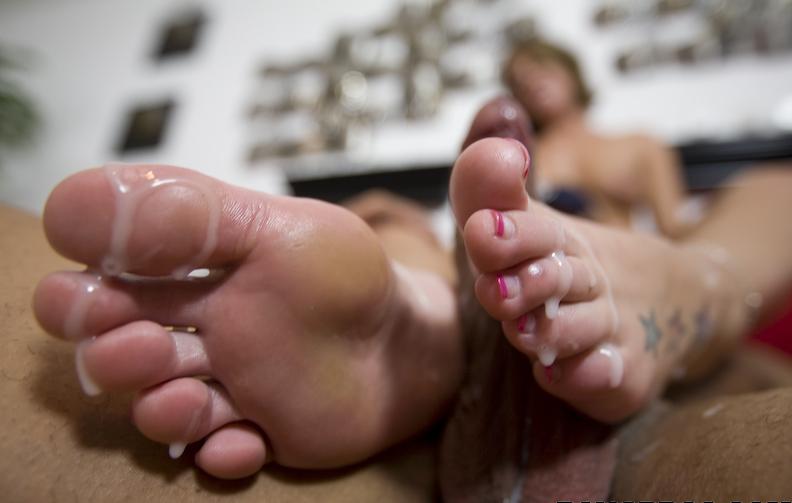 There’s nothing like a foot job to keep a family close! As you guys must know by now I love to tease, terrorize and fuck ‘straight’ men as a pastime. I never let an opportunity to share a naughty moment with a hot guy pass me by, I can tell you. So when I went to a very boring family dinner to celebrate my nephew’s graduation, I immediately noticed my sister’s husband Thomas. He had lost some weight, had obviously been working out and I noticed for the first time how attractive he was. Tall and muscular, with broad shoulders and bright blue eyes, he definitely caught my attention, and got my filthy slut brain ticking!

We hadn’t seen each other in quite a while, in fact since I had my big surgery, so he had never seen me look the way I do now. I saw him watch me and my parents approach, and his eyes nearly bulged out of his head when he saw me in my little black dress with no bra and killer black heels. “Alex, erm Alexis, how are you? It’s been forever and you look…amazing!” He exclaimed grabbing me in for a hug. I let his arms encircle me and pushed my tits into his wide chest, letting him feel them through the fabric of our clothes. I lingered just a little before releasing the embrace.

As I stepped away I looked into his eyes, and a moment of electric chemistry passed between us.

Everyone sat down to eat and I made sure I was sitting opposite Thomas, with my sister sitting on one side of him and an old aunt of ours on the other. The aunt was in her 80s, is very hard of hearing, and going slightly senile so she didn’t really say much, just ate quietly. We all got seated and were chit-chatting about this and that with everyone settling into random conversations about boring normal crap. My sister was leaning over and waffling on about her embroidery or something with a cousin of ours.

Thomas looked over to me, with a wicked look in his eye and a naughty smile playing on his lips. “So how have you been Lex?” He asked, leaning forward. I leaned forward too, slowly running a finger around the rim of my wine glass. “I’ve been great!” I said, holding his eye, then “I must say you are looking delicious Tommy”, slowly licking my lips. He sat back in his chair and looked a little confused. I could see his brain working, knowing I was his brother-in-law that he had known for 15 years, but also seeing this beautiful, curvy blonde woman sitting in front of him, obviously being sexual and flirtatious. I knew he was imagining what I looked like naked.

“What’s the matter, Tommy? Spit it out!” I said playfully.

Leaning back in my chair I slipped one of my shoes off, extended my toes out, and found his ankle. I saw his eyes go wide for a second and he jumped a little as he felt my perfectly manicured toes start to caress his calf, but he didn’t stop me, just looked around nervously to see if anyone had noticed him jump.

That was the signal I needed so holding his eye I started to slowly work my foot and toes up the inside of his leg, up past his knee until my foot was flat in his lap, my heel at his balls, and my arch resting against his crotch.

I felt him immediately harden, and I pushed my foot against his growing boner,  rubbing the shaft through the fabric of his pants.

I teased him with my foot, dancing little rhythms with my toes interjected with hard squeezing of his pole between the ball of my foot and my pads. So I was watching him and I knew he wanted to take it out. He asked me with his eyes and I nodded a slight yes. He put his hands under the table and undid his zipper, and I felt the warm skin of a large, rock-hard cock touch my instep. It was all I could do to keep my excitement down, and I practically flung off my other shoe under the table, extended both my legs, and gripped his fat meaty length between both my arches. I’m a very accustomed foot-job-giver and I can make my arches grip very tightly, and I like to work up a nice milking action while I jerk and stroke a nice stiff flesh rocket!

I could see he was squirming and it make me stroke him faster.  No one was paying attention and luckily so because if my sister so much as turned her head she would of known straight away by her husband’s red face and strained expression that he was about to blow a load all over my pretty little painted tootsies. I knew that it was going to make a huge mess but the excitement and rush of knowing we could get caught spurred me on, and I pulled and milked his thick sperm needle until I saw him grip the edge of the table until his knuckles went white, he closed his eyes and grimaced, and proceeded to squirt a huge mass of thick, white creamy cum all over my toes, soles, heels, and ankles, the stuff went everywhere!

I smiled to myself as I watched him recover from his heavenly orgasm and realize where he was! He hurriedly did up his pants and tried to steady himself.

As I bent down and wiped my sticky jiz-covered feet with a napkin. He seemed to realize what he had done as well and I giggled naughtily, throwing the napkin onto the table in front of him as I laughed and waggled a finger at him playfully. Then he looked sheepish and embarrassed at his indiscretion, but at that moment my aunt who I had totally forgotten about, turned to him, grabbed the gooey napkin, and wiped her mouth with it, totally oblivious! We could both clearly see the shiny man’s mayonnaise coating on it as she did, I looked at the look on his face, and I couldn’t help but laugh out loud.