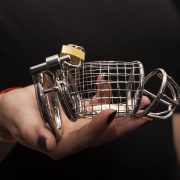 Sibling cock and ball torture is a fun game… for me, anyway.  Sometimes my brother can be a little brat, so I take it upon myself to remind him who the older sibling is.  Some would smack around their little brother a bit, but I find that you get the best results by going straight for the balls.  It’s fun to watch my brother’s tune change when he wakes up in chastity.  Imagine not being able to jerk off for an indefinite amount of time until he makes me, his sister, happy.  I pretty much have a slave for however long I feel like caging him.  But, what happens when he makes me really mad?

His balls don’t have a prayer.

Though it may seem like an insignificant reason to declare war on my brother’s balls, the last straw was that he ate the last yogurt. I know, I know. It sounds small, but those were my yogurts and him stealing the last one forced me to go hungry after cheer-leading practice. This meant war. In the past, I had practically spoiled his undeserving testicles by letting them be cradled by smooth, painless steel. Not this time. For his most recent discretion, I had something new: a chastity belt adorned with sharp thorns that would poke into his package all day during school. With me holding the only key and it being exam season, he would have no choice but to wear it as he struggled through his midterms. Imagining him sitting in homeroom with the pain of a thousand needles pressing into his soft, vulnerable flesh filled me with twisted glee. He wouldn’t even be able to squirm around too much without risking drawing attention to himself.

A unique feature of this particular model was that it tightened more as you struggled against it. How absolutely brutal! Imagine walking down a hallway and having your ball trap squeeze even further. You had better be careful, bro. Girls are watching. Are you sure you want to grab your balls in pain with all these people around? It was going to be even harder for him later, during gym class. How was he going to hide his little jockstrap issue? Unless, of course, he wanted everyone to see his poor, beat up cock in chastity. I could just picture it: my brother stumbling into the nurse’s office and showing her his damaged goods, struggling to explain to the nurse what he did to deserve this sibling cock and ball torture.

Your cock and balls don’t even need the belt.  They are an embarrassment unto themselves.  But I’ll tell you what.  I’m going to slide you a note with my terms on it.  I’ll take off your cock ripper if I get to knee you in the dick 50 times. Oh, and you owe me a yogurt. Will you accept this beating to relieve yourself of your torturous cage? Don’t you want the sibling cock and ball torture to be over, and for your sister to love you again?

We both know the truth.  Deep down, you love this shit.  Sibling cock and ball torture is what you live for nowadays.  You want me to twist your nuts until they pop, and I am happy to oblige.  I want to step on them and beat them into submission, and you wouldn’t have it any other way.  Be a good boy and admit it. If you do, I might actually let you touch your cock when I lay it out like a prime cut of tender meat.  What do you say, bro?  Care to be honest with yourself?

Would you admit to your hot sister that you liked the way she teased and tortured you?  Call my phone sex line and let me know.

One Reply to “Sibling Cock and Ball Torture; Showing My Brother’s Balls Who’s Boss at School for Pissing Me Off♕”