Brother and Sister Are Convinced to Fuck One Last Time ♕ 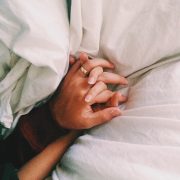 Brother and sister rekindle their old flame for each other.

Brother and sister should NEVER fuck!  That’s the rule.  I never quite figured out why not, actually.  My mom was furious when she found out that my brother and I had been doing it right under her nose.  I have to admit, it was super embarrassing for her to walk in on us like that, but we loved each other.  So, how could it be bad?  Anyway, she made us stop and said our father could never find out about it.  It had been years.  As much as we craved each other, we had to put that part of our relationship behind us.  We were just normal brother and sister now.

My brother had gotten himself a girlfriend.  I wasn’t jealous or anything.  Okay, I was kind of jealous, but she ended up being really cool.  If I had to give someone my blessing to pick up where I left off, it would be her.  I guess she felt a similar way about me because she came up with a wicked idea.  She’d gotten into incest stories recently in a big way.  The girl was obsessed and thought about what it’d be like to watch my brother, and I fuck constantly.  Finally, I worked up the courage to ask me to come over and just…talk about it.  What did I say?  What do you think I said?

She tried to keep us at ease, not realizing that we’d done it already so many times.  He was instructed to touch my shoulders and work his way down.  Not only did he do that, he decided to leave a trail of kisses along my neck without being told.  Of course, I loved it, but I’m sure his girlfriend was a tad confused.  Even still, her hand was in her panties, stroking her pussy to the little brother and sister show we were putting on for her.

I felt his cock for the first time in forever

He was getting hard.  I had forgotten how big he was.  Damn.  I’d been wasting so much time with so many duds when I could have had this all this time.  I stroked him through his pants, and he got even bigger.  Bro!  Where did you get all of this cock from?  Had it really been that long?  Obviously, I had to see it for myself.  I whipped it out, remembering to dodge when it swung out.  Some things never changed.

Licking my lips, I had to have a taste.  I swallowed up my brother’s cock immediately and lubed up his cock with my sister’s saliva.  My throat was his, and I made sure he felt it every time I let the tip of his cock kiss my tonsils.  At some point, something in his brain snapped, and he had me in his arms.  I guess that same thing snapped in both of us because it was like we had forgotten his girlfriend was even there.  He just carried me to their bedroom.

Even a nuke wouldn’t stop us from finishing what we started.  He had me on my back, and my legs were wrapped tightly around him.  I begged for his cock again just like old times, and you’d better believe he let me have it.  With one thrust, he made his way all the way inside and fucked me like I was his again.  His bare brother cock was being worked by my sister’s pussy.  We were animals, and I only wanted one thing: his baby with my one-track mind.  I even shouted it out over and over.

Well…he’s always had a hard time saying no to his little sister.

Load after load flowed into my cunt, and I took it all.  Oh my god, why did we stop?!  Why did I stop fucking my brother?!  Oh, right…the baby part.  Worst still, his girlfriend saw the whole thing!

Uh oh.  It looks like this brother and sister may have a baby on the way.  Well, if brothers and sisters and moms and sons and daddies weren’t supposed to fuck, they shouldn’t have made incest so hot.  Call my phone sex line if you agree.