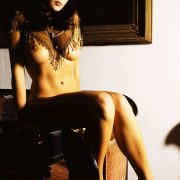 Did you know an orgasm is called “la petite mort.” French for the little death. If that is true. Then this bratty sub is suicidal, addicted to the little death a Dom causes.

He had that look. The one that devours his prey after an evening of teasing. The Sex Kitten knew even her most innocent gestures got her point across as she heard him growl,

“wait till this event is over, little girl.”

The anticipation of feeling him drive into her with that hunger. Just thinking of it caused her to shift uncomfortably, hiding the fact she wished she had worn panties. Then maybe she wouldn’t feel the drip running down her inner thigh.

“Come with me,” he said as he put his hand on the small of her back, guiding her up the staircase. He took her to the third door on the left, pushed her inside. And before she could say anything, he had her bent over a huge mahogany desk.

He lifted her skirt around her waist and primed her ass with a vigorous rub before she felt the first smack. She smirked as she knew her cheek was turning into a shade of pink.

His hand stung a second time and with his other hand. He inserted a finger deep inside her with a swirling motion.

“You know how dipping your finger into your cocktail across the room and tasting it teases me,” he calmly stated. “Let’s see your pretty little lips taste my finger now.”

She eagerly sucked her juices off his finger.

He kissed the back of her neck as he unzipped his pants. With a quick push, He slid all the way inside her. She gasped as she took him deep.

He grabbed her by the neck and became relentless with each thrust. My God, she was quickly brought to the edge by him.

“Don’t you dare babydoll,” He hissed. “Let’s see how you enjoy a bit of teasing.” She moaned and gasped,

as he pulled himself out of her wet flower and zipped up his pants. “I suggest you think twice before teasing me anymore tonight. Now make yourself presentable before we head back down.”

“Yes Sir” She said as she stood trembling for a moment getting her dress adjusted.

Everything and everyone was there where they left them just a few minutes earlier. Including her cocktail.

She grabbed it, swirled her finger around the ice, and placed it in her mouth before sucking it clean… all while staring into His piercing hazel eyes.

She turned around her swollen pussy leaking more juices down her leg and smiled. Tonight was going to be a good night. She knew he would not let her get away with her bratty sub behavior.

She made up my mind that she was going to do it. The night was full of possibilities. The air for her was electric. And tonight, she will experience ecstasy like she never had before. she was so turned on and

her pussy was hot and wet.

It was really swollen. She was looking around for anything to antagonize my Dom more. But could not stop flashes of memories from making my clit throb.

“Yes,” she moaned as he drove his cock in and out of her hot cunt. “That’s it, fuck my hot pussy.” He heeded her pleas when he bent his cockhead and shoved it all the way up her cunt.

Coming back to the present She heard the music playing and people were dancing and everybody looked very attractive.

The place was getting more packed it was hard to focus on just one. But a man who looked like he was in his middle thirties. He had sparkling green eyes and a smooth clean-shaven face. She thought that this might be the one. He was nearly beautiful.

“Are you here all by your lonesome?” he asked

She decided that he was going to be the one. “Take me to your place,” She said. “I want to go a little wild”

“Alright!” he said. “Tonight, I feel like doing the exact same thing.”

“Tonight,” She said, “is going to be heaven on earth.” She locked eyes with her Dom. Not even trying to stop the naughty smirk on her lips, or the evil gleam in her eyes…