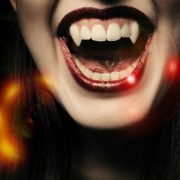 The Bram Stroker vampire tales start right here. No, not the vampire tales you’re used to. I’m talking about the down and dirty in every city around the world! Alright, alright. I know what you’re thinking and I’ll tell you right now, the devil made me do it! Shhh. Don’t go spreading that around. I can’t help it, I’m a freak for the meat! If you want proof, you should read a few of my other horror tales. Maybe, try reading what happened to me in, Sexually Depraved Backwoods Forced Fuck Horror Porn. You’ll know exactly what I mean. Giggle.

I was fooling around with some of the FetLife apps online and fell into the rabbit hole called KinkD. It’s an awesome app not only because the users are all open-minded and into kink, but because it also puts them through a full-range sexual compatibility process. I mean, when you’re ready to fuck who wants a limp noodle with DREAMS of having a fatty in his pants. lol.

One thing led to another and I found a dark web app known as, ‘Bram STROKER Vampire Tales’ and plugged right in.

There was a party listed for vampire-types and I felt myself moisten at the thought of what all that might entail. I got all of the deets then made my reservation for a mansion party just outside of upstate New York and found they still had suites available for the soiree; I booked the best. Having no desire to explain myself to my girls I decided to do a sneak-away vacation all by myself. Well, maybe not all by myself. I had made the acquaintance of a certain charmer on the Bram Stroker Vampire Tales app and the weekend getaway would be the perfect time to see what was up with him.

The limo pulled up at the grand entrance and I was ushered in at sunset to a scarce lobby staff. Oh, well. Maybe they were all doing set-up for the festivities. I got my key-card and ascended in the lift to my penthouse suite. Running a steamy hot shower and settling in with my favorite libation, I fought the urge to take a short nap. It was a perfect sunset and I felt myself begin to drift away.

There are some things the Bram Stroker Vampire Tales never mentioned in the finest of fine prints.

I woke to a hazy dream of three men in my suite, all of whom were moving in slow-motion. Whatever they had given me was like a roofie on ecstasy and I probably wouldn’t have fought it if I could. I had flashes of traveling old-school through the woods in a horse-drawn carriage. Okay, so maybe I fantasized about some of that.

I glanced down to see that three women were with me naked and so was I! Had the party started without me and where was everyone else at this shindig? And before I could ask anything, I felt a tongue slithering between my legs and it felt so good.

Random dicks shoved in my face while others licked every place I could have wanted. Until someone bit me! What the hell? I felt a warm ooze rush over my ass cheeks and onto the fine linen on which I lay. The copper-like smell was clear to my senses as being blood. Most importantly, it was my blood!

Hey! Is this what the Bram Strokers vampire tales is all about?

What they should have listed it as was a free-for-all fuck fest! That would have been more clear. But, I was already in the swing of things. So, I went with the flow and let it play out as it might. I grabbed the closest dick to me and downed it like a cold beer on a hot day. All at once, that is. As I fucked and sucked I began to feel the after-effects of whatever drug they had used to sedate me and I felt sick to my stomach. I threw up as if on queue. one of the handmaids lifted a silver can to my face and I started to feel the change beginning to happen.

When my feet hit the floor, I felt like I was floating.

But, whatever this thing was, I was in need. I entered each room and took all that I needed. Especially, the blood. Catching a glimpse of myself in a long mirror, I could SEE the same changes I’d been feeling. There, in my reflection was everything. I had changed over into vampirism, and it felt so fucking good.

Hey! There are worst things to change into. I can now get all the dick I want and get fed too. So, who’s up for a Freedom Fuck? I’ll let you put it anywhere you need it if you let me do the same for you. Welcum to the Bram Strokers vampire tales! Moreover, you can get it all with me. Don’t be the last to know where the ultimate keys to fetish phone sex at the kingdom lie!