Bondage Stories; My Introduction To Bondage Was Just The Beginning 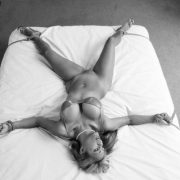 A girlfriend of mine and myself were sitting in our favorite bar the other night. It was really slow, most of the regulars seemed to be elsewhere. This nice looking guy came in and was looking at all the ladies in there. A few of us he approached and handed an invitation. I read it and laughed. It was to some private sex party a few blocks from here. Normally I’d not take such a thing seriously, but it was dead in here, why not? So my girlfriend and I wandered down to the place on the invitation and it looked like a respectable neighborhood. So we knocked on the door and were asked for the invitations and then ushered in. I never knew that evening was going to lead one of my bondage stories.

It was dimly lit, but there were a few dozen people here. A heavily laden buffet table with lots of goodies to eat on display. A big punch bowl and lots of drinks and even a bowl of pills and joints. I got a plate of food and some punch and immediately I felt a bit funny. I think the punch was spiked, but with what I did not know. My girlfriend wandered off with some other man, smiling.

I felt very nice, floaty, light and surreal. I was approached by a good looking man that asked if I’d like to dance.  And I went with him to the dance floor where several other couples were dancing. He held me tightly and kissed me and asked if I’d like to go somewhere more private. I nodded and he took me down a corridor to a room with a bed in it. The bed had these strap things at all the corners and he asked me if I’d been tied down before.

I Was Squirming And Panting With Delight

I said no, but it seemed interesting to try. I’d read some bondage stories online before, but had never tried it myself. I allowed him to undress me and lay me back on the bed and strap me down. He also blindfolded me. I was so turned on and the spiked punch had made me feel incredible. And  I felt his hands move all over my body.

Most bondage stories do of course have fucking in them at some point, and this one was no different. The bed creaked slightly as he climbed on top of it. I felt him over my body and could hear his heavy breathing. I felt the head of his cock slowly enter my soaking wet pussy. He eased inside of me and started to pump. Normally I’d wrap my legs around him and my arms as well, but I was tied. And  I couldn’t move for the most part, so it was heightening everything, making me aware of the slightest movement.

I Was Soon Catching My Breath As He Untied Me

I gasped at the thickness of his cock as he pushed into me, it felt heavenly.  And I could feel his breath on my neck as he pumped harder and harder. He reached down between my legs and spread my cunt lips open, exposing my clit. Every thrust rubbed against it and it was not long until I came and cried out. I then felt him squirt his load into me. Rope after rope of his hot jizz. It felt wonderful, and I was soon catching my breath as he untied me. I suppose some bondage stories might be more dramatic, but this was a lot of fun nonetheless.

It had been a very naughty and unexpected evening