Bimbos – Origin of the Word and Where Did This Term Come From?* 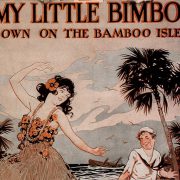 Bimbos – Origin of the Word and Where Did This Term Come From?

Depending on who you are asking, Bimbos can be descriptions or insults. Where did the term bimbos originate? Oddly enough the first usage of the word bimbo is logged in the year 1919 in the United States as a slang word. Using the word to describe an unintelligent or brutish man. What? Yes, really.

Later in the 1920s, transferring the term women. Describing the women that were built to kill but dumber than a box of rocks. Irving Berlin actually published a song in 1920 called, “My Little Bimbo Down on the Bamboo Isle.” The song alludes to an attractive woman who is promiscuous. Furthermore, even the illustrated sheet music cover shows a dancing woman all made up.

Do you enjoy the term bimbos or does it offend you?

As time is moving on, bimbos are getting an even worse rap. The musicals and movies are painting them as dangerous broads. Associated with gangsters and thugs. In the storylines, the bimbos are the women found on the arms of such hoodlums and can’t be trusted. Personally, I think that sounds like fun! Just like the fun I have with my hot naked MILFs.

Time keeps on flowing and bimbos transition again to more of a hot lady with no intelligence. Even more movies, books, and comics continue to paint our sweet girls as idiots with bodies to die for. They now have big hair and lots of make-up to add to their persona. Most noteworthy, the term bimbo goes in and out of fashion for years and then…

Although, Fawn Hall was likely not a bimbo she was referred to as Lt. Col. Oliver North’s bimbo. She was North’s acting secretary. To be this level of a secretary, I am sure Fawn was not a bimbo, but that name. Damn, it shouts bimbo!

Then you had Senator Gary Hart, who had a scandalous affair with Donna Rice. He was a contender for the Democratic nomination for President. Furthermore, we all know if you have skeletons or bimbos in your closet when you get this high up, all will be revealed and was for them. Therefore, Senator Hart lost out. In contrast, Donna Rice did not, she refused to do any interviews. She did end up being the face of No Excuses jeans for a short time. No bimbo there!

What comes to mind for you when you think of a bimbo?

Every guy wanting to fuck them. Consequently, even the alien monsters are fucking these hotties. Most of the time it is a violent activity with those pretty ladies getting it hard and fast. Sometimes, machines are doing naughty things to them. They are sexy bimbo bitches that are taking it like a champ. Seems like that is my kind of girl.