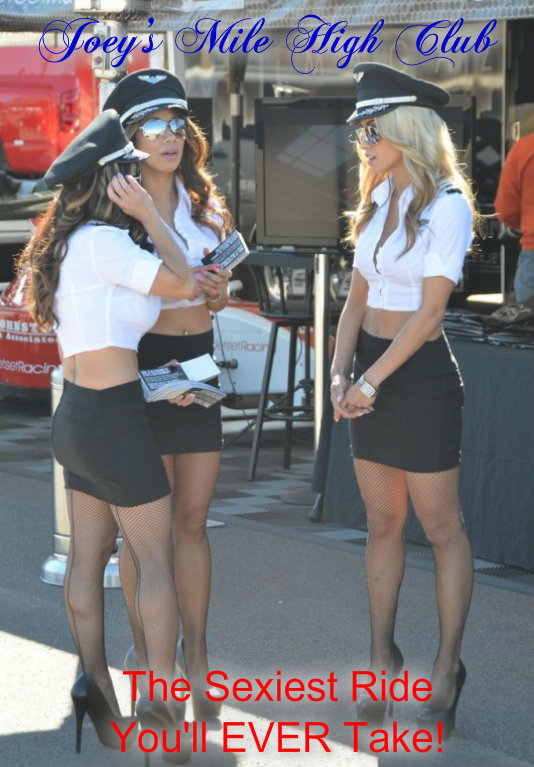 Mile High, anyone?  One would think joining a club, any club, would be a…conscious effort. Not some random act, with some random guy, on a random flight, Oui? I am the head-Hostess for our fancy-ass airline. So, on my not random flight, wearing my traditional travel attire, white silk button front blouse, navy high-waist pencil skirt, worn mid-thigh, navy thigh high stockings and navy Manolo Blahnik 5″ stacked heel pumps. Our hair is up-swept and held in place by a french comb, much like the french Twist.

Henry didn’t exactly catch on when I rubbed my finger against the back of his tanned knuckles and I handed him his coveted Croizet Cuvee Leonie. I guess the brainy types don’t necessarily know when they’ve been made. So, what’s a thoughtful air-hostess to do? Well, I leaned into him to get the spare pillow from the inlaid wood bookcases built into each bank of seats. My braless tits pressed against his cheek. It was innocent enough…for me.

Pulling back with the pillow, I found Henry in need of some special resuscitation efforts. His tanned face had gone ashen and all he could manage to say was that my perfume was intoxicating. I smiled and bit the bottom lip again before casting him a sultry look through my tangle of eyelashes.

“Perhaps you should go splash cold water on your face?”

I managed in pretty good American English, but still thick French accent. He stumbled to his feet like a drunk, only I knew he wasn’t. He had said the smell of me was intoxicating…Maybe I should rethink my choice of new member. But, he was as fine as hell and he smelled pretty edible himself. I watched him stumble off to the bathroom.

Seconds after the door was pulled closed, but before he had the chance to flip the “Occupied” sign, I slipped in behind him. Henry didn’t try to hide the shock, the way he’d tried to deny that rock hard cock sticking out in his pants. I slammed him against the only free tile wall (so familiar with that wall!) pulling his shirt out of his pants as I pulled them down in one fell swoop. Hungrily, I pulled that magnificent cock from his pants so that the pre-cum was like a teardrop on the head. I hungrily lapped it up paying close attention to that spongy head. I love to nibble very gently on that…He pushed the entire length of him down my throat; his hand gripping my throat as he stroked.

I knew he could feel every movement with his hand in place.

Henry came a second time while I fucked his ass with my tongue…buried as far in him as I was able…I have a great tongue! The second one was my personal milkshake. And I slurped up every drop. What? Did I neglect to mention being a cum-aholic? Hi. My name is Joey. And I’m a heavy drinker. LOL

Wondering how we made a graceful exit from that bathroom? Call me, I’ll give you details to tender for here. What?!?  It’s NOT like I’m a fucking NUN! Giggle