Bi-Sexual fun how Sexy Dawn and I play when we go on Vacation! ♕ 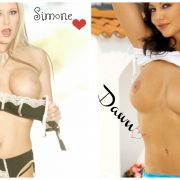 Bi-Sexual fun how Sexy Dawn and I play when we go on Vacation!

Bi-Sexual fun how Sexy Dawn and I play when we go on Vacation!

Being a phone sex operator is great because you get to spend a lot of time at home and you can have flexible hours. As a single momma that is very rewarding. However, you do need to log a lot of hours to earn good money. Even though the play is fun and conversations are thrilling it can become lonely being home so much.

So usually I invite playmates to come over to try out new things as material for my work. That is always a lot of fun but again sometimes I just want to get away from home. So I decided to take a little bit of a vacation.

My last vacation if you remember I went to Hot Springs, Arkansas. That was huge fun! I met the lovely bi-sexual fun Dawn and we had an amazing time in the Hot Springs Baths. Turns out she works for Phone Sex Kingdom also and baby is that girl a lot of kinky fun!

Are you ready for a hot bi-sexual fun vacation?

So I gave her a call and said it is time for us to go on a research trip, aka Vacation! She giggled and was all in! We decided we would take the train to St. Louis, Missouri. We had heard that was a fun place and there were hot sexy men of course.

The train ride was a blast. We met a group of men who were enjoying a bachelor’s trip. They were drunk and horny. We enjoyed listening to the raunchy tales of the soon to be a married man. Turns out he was a real player. Dawn and I giggled knowing that once a player always a player. Sure enough, he cornered me at the bar and was hitting on me hard. He was tall and handsome and being the slut I am, I could give two shits about the moral aspect of what fucking him would mean. After all, it was going to be somebody so why shouldn’t it be me? I saw him eyeing the bartender. I wondered if his soon to be wife knew he had bi-sexual fun?

Fucked in the toilet!

Have you ever fucked a 6 foot 4-inch big man in the tiny bathroom of a passenger train? Well, let me just tell you, it is quite the feat. That big man had a big cock and my skinny ass was just limber enough to get wrapped around him for a hard fuck! I am absolutely certain that more than one passenger knew what was happening in that cramped up toilet.

We lay together completely satiated for a long time before deciding to go to the famous Broadway Oyster Bar. After indulging in the delectable Oysters and far too many drinks we decided to leave for Club Viva that we had heard about. Before, we could leave though two sexy men stopped us and asked us to join them at their table.

Just John it is!

Turns out they were also bi-sexual fun friends on a trip. Even more coincidental they were staying at the same hotel as we were. We told them about a plan to go to Club Viva, they suggested instead we attend with them to the Just John Club. They told us it was a gay/lesbian nightclub with a dance floor, performance stage, indoor and outdoor gathering spaces. That sounded very intriguing to us and we all agreed. Just John it is!

We were completely satisfied with our decision because the ambiance was incredible and perfect for our little foursome to indulge in some sexy adulting. Our new friends Tom and Richard who smirked when I called him Dick also enjoyed bi-sexual fun like Dawn and I. We loved the idea of being a foursome and not pairs. Seeing those sexy gorgeous men just as infatuated with each other as they were with our tight female bodies was a huge turn on for me. We played together on the dance floor and out in the moonlight on the patio when we needed a quick cool-off.

It was the early morning hours when we stumbled drunkenly into the hotel. We went to our room which had a king-size bed. There Tom began to suck on Dick’s dick! Dawn and I were getting really turned on watching their play. Soon we were playing with them and each other. Seeing Dick so hard I joined Tom and began licking him and sucking his balls.

Dick being the amazing bi-sexual fun sex God that he was rebounded quickly and thrust his cock into my mouth. I sucked him hard again cleaning all pussy juices off. This time he lasted a long time. He was able to fuck Dawn, Tom and me before finally busting a nut all over us all!

The night and the rest of the next day consisted of this kind of play. We greatly enjoyed each other so much that we just ordered in and stayed in that luscious king-size bed.