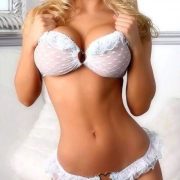 I’m the Best Girlfriend Ever!

I know I am the best girlfriend ever because I am told this all the time. Especially when I come up with some elaborate gift for my significant other, like my naughty version of the 12 Days of Christmas. Except, it’s not about a partridge in a pear tree or turtle doves. I call it the 12 Days of Porn-watching Christmas.

So, we started the 12 Days of Porn-watching Christmas the Sunday before Christmas and it will come to a grand finale on New Year’s Eve. It occurred to me that such a naughty Christmas gift might be considered blasphemy. But, I’m not one to shy away from something taboo, you know that. My lover seemed to have the same thing on his mind. The first porno we watched was a young Catholic schoolgirl seducing the priest at her church. He surprised me with outfits to match our roleplay. I dressed in a tiny little plaid skirt and white button-up top. Of course, he didn’t forget the white thigh-high stockings. I put my hair up in pigtails to complete the look.

He played the role of the resistant priest well. I really had to convince him to fuck me. I had no idea he would get so deep into this roleplay, but it made it so much hotter. We acted out the girl pleading with the priest to just let her get one taste of his dick. Of course, once her mouth was around his tip there was no turning back. I sucked my lover’s dick with the same enthusiasm and desperate hunger as the schoolgirl. Then made him fuck all my holes even though he tried to refuse the whole time. In the end, he blew his massive load all over my face.

What a fun start to our 12 Naughty Days of Christmas!