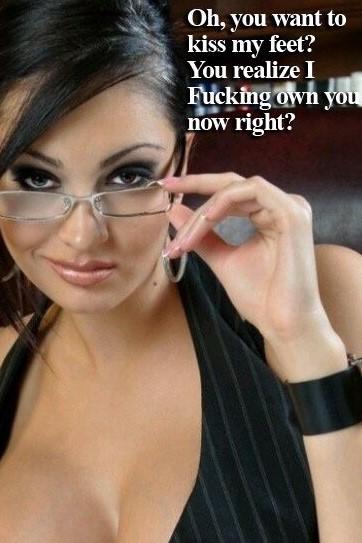 He was a big burly man who needed something that no one had ever given him before. I was not afraid to give him exactly what he needed.

His manhood had to be stripped away.  I forced him to wear a pretty white lacy nightie. Then squeeze his massive feet into a pair of my tiny heels. His painted toes were a pretty red and I smeared lipstick across his lips. As I applied eyeliner I smudged it to appear it was running down his face.

He begged my mistress to have mercy on him. I did not. Forcing him to his knees I told him to sniff my feet. I allowed him to remove my left shoe and bury his face in it as he got on all fours on the floor.

I pulled his sexy white lacy panties down from his ass to his knees. That is when I applied lube to his tight little man pussy. He was my little whore now. He replied, “yes, Mistress” like the good little bitch that he was. His ass wiggled in anticipation not knowing what I was going to fuck him with. I lifted my right foot and place my heel to the opening of his ass and told him, “you will like this and beg for more my little whore”! Groaning he pushed back against me when I pushed my heel deep inside him and he begged for more. He wanted me to foot fuck his whoring little man pussy.

I straddled his face!

He buried his nose deep in my shoe and breathed deeply moaning in ecstasy with my assault of his ass! Stopping after a few moments I ordered him to turn over and that is when I straddled his face and for the first time allowed him to see my pussy. I pissed all over him and he relished the hot liquid splattering all over him. He played in it and drank it begging for more.

I walked away and told him he was allowed to finish without me!

Is this what you need? Do you deserve to be treated so cruelly? Are you a sissy boy who wants to be dominated? If you are looking for some fetish phone sex with the best phone sex operator then you need to call me today. Phone sex kingdom is exactly where you will find what you need. Call and mention this blog to get 5 minutes off a paid 10-minute call!