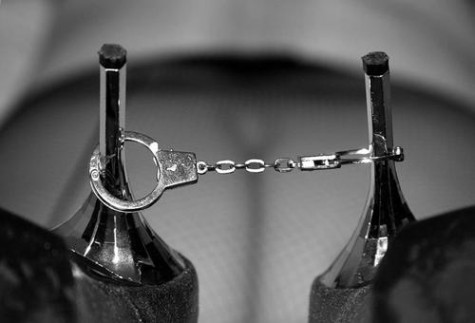 When I was naked he grabbed me by the back of my neck and dragged me to the bed, shoving me down on it. I sat there as he went to the dresser and took out some rope and a rush went through me. He held one of my breasts in his hand as he wrapped the rope around it then looped the rest of the rope around my body before tying up my other breast.

He did it tightly and the rope bit into me with a burning pain that hurt like hell. Then, he knotted it up tight and gave it a little yank, making me whimper before he forced me to lie on my back. Next, he leaned over me as he tied my wrists to the headboard, making sure there was no way I could move. Finally, he then got between my legs and pushed them up to the headboard, tying my ankles up to my wrists. I was folded in half and my pussy was soaking wet and ready for him.

I looked down at him and saw that my breasts were swollen and red as they stuck out from me. They felt heavy and sore as the blood got cut off and my nipples were puffy with an aching pain in them. He knelt between my legs and ran a hand down one of them, making me shiver then leaned forward. His hard dick pressed on me as he raised his hand and brought it down quickly, slapping my bound breast. It hurt so bad and I let out a scream as my breast bounced against the rope.

He smirked at me and hit me again and again until my eyes were watering. And until I was whimpering in pain. Then, my breasts starting to hurt and I needed to move them. However, when I tried to ease the feeling by wiggling around the rope just dug into me even more. Ben laughed at me and called me a stupid slut as he held his dick and started pushing it into me. He felt huge as he went in deeper and I moaned as he shoved the last inch in.

He began fucking me, pushing down on my legs and making them press against the rope. Every time he thrust forward my body shook and pain flared through me. It was hard to breathe and I kept crying out as he moved in me. My pussy was soaking wet and my clit felt like it was on fire. His dick ripped past my walls and hit me deep inside. Juices were running down my crack, as he grunted. Then, he panted on me and a heavy, tightness spread in my lower stomach.

He went faster, his dick pounding me until I tensed up and screamed. I screamed so loud I was amazed the neighbors didn’t call the cops. My pussy clenched around him and his thrusts became shorter and harder. That is until he rammed his entire dick in me and shot his load. When he was done he took his time untying me and I was so worn out and in pain that I just curled up in a ball. Everything hurt, but I had loved every second of it. Ben’s right; I am a slut. If you love pain and love to cause pain, then I am the bondage whore for you! How about more crazy sex stories?