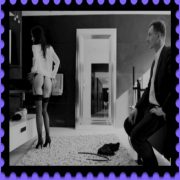 Ashton had invited Rebecca to his conference in Toronto, they had their marriage difficulties after 7 years of being together.  The marriage had started steamy but had dissipated in recent years.  One day, in sexual frustration Rebecca had checked his browsing history.  She had been worried he was maybe seeing someone else on the side, after all, he traveled a lot but what she found was something else.  She had found he had been watching videos of cuckolds.  At first, she was a little dismayed, but she found herself unable to quit thinking about it.

Earlier that night in the hotel, Rebecca and her husband had dinner at one of the exquisite restaurants.  After they were done, Ashton wanted to head back to the hotel because he was tired.  She had none of it, she had been in Toronto for 4 days and there was only so much shopping to keep her entertained.  Rebecca wanted some excitement.  They ended up in a nightclub where the couple was approached by a sexy stranger. He was everything and more.

Back in the hotel room, Rebecca’s heart fluttered as she removed her panties.  Looking over at the chocolate stud, as he removed his pants revealing his large throbbing cock. Slowly stroking his shaft, as he watched Rebecca’s every move.  He was as hungry for her, as she was for him. The stranger’s big black cock was clean-shaven and much bigger than her husband. All she knew was that she wanted a piece of it.

The stranger continued nibbling and biting Rebecca’s rear.  She giggled for a moment, she didn’t even know the stranger’s name.  Nor did she care, as with one hand she caressed her lips.  She was so turned on as she focused on her wet clit.  The sexy stranger didn’t miss a beat, as he made himself familiar with her sexy body. The man only stopped long enough to place himself on the bed.

His body was remarkable.  There was something so exciting about having a stranger being there in the bed with her, as her husband watched. Strong and determined, he entered Rebecca with great pride. Taking her silky wet pussy with every inch of his throbbing black cock. Rebecca’s eyes widened as his shaft both stout and girth entered his drenched welcoming twat.  His cock was so much bigger than her husband’s cock.

Without missing a beat, He pumped his massive black cock deep into her.  In perfect rhythm at first, as he increased veracity.  It sent shutters down her body, as she looked back at her husband who continued to record. “Ashton,” she said.  “Come here,” it wasn’t a request, it was an order. Ashton came to her side of the bed, he was still wearing his dress shirt from the night before but fully nude on his bottom. “Kiss me,” she said. This experience was for both of them.

Furthermore, let me teach you the Pleasures of Fetish Phone Sex with No Limits.   Read more of my Sizzling Hot Sex Stories anytime!!!  What is your forte?  Let’s add Phone Sex Chat to our call. I want to keep you holding on for as long as you can for the most Mind Explosive phone sex experience.  In other words, I know we will try incorporating it into our next call.  (Wicked LiL Grin) Can you do it for me?