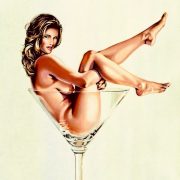 Bathroom blow jobs are dirty, fast, and a hell of a good time.

Bathroom blow jobs in bars I worked at were an even better time. It was a busy night. I wore my usual daisy dukes, black boots, and a halter top. My hair, long and in a high ponytail,  bounced right to left as I walked from one end to the other. I scanned the line-up seeing if anyone could do the trick for what I was craving. I was horny as fuck; however, sometimes I like to try the goods before taking them home. A man walked in, covered in tattoos. A built body, with blue eyes, together with a bulge in his jeans that would spark anyone’s attention. The crowd was loud, and as he sat down, I said to him, “bathroom blow jobs?”

“What?” he said, trying to yell over the crowd. “What can I get for you?” I said as I smiled and threw a coaster in front of him.

“I’ll have a pilsner and a shot of bourbon, please.” He replied.  He smiled at me, and as I walked to get his order, I glanced at the long, wall mirror in front of me. His head was at a tilt, and his eyes were moving, particularly watching my every move. He was so sexy, even when he was staring. I looked up and met his eyes in the mirror. After slightly overpouring the beer,  the head started to drip over the side of the glass onto my hands. Placing the glass down and without losing his glance, I licked the foam off my fingers. I walked over with his drink, placing it on his coaster, and then picked up two shot glasses.

I grabbed a bottle of whiskey and poured us both a shot.

“You’ll be joining me, I take it?” he said. “I definitely will be, sir,” I said as we clinked simultaneously. We sipped the glasses and tilted our heads back. The warm whiskey sliding down my throat made it even clearer to me how horny I actually was. I slammed the glass back down and continued down the line of customers, still holding his glance. I was taking another order when suddenly I heard a crash. His beer had fallen onto his lap and then smashed all over the floor. “Christ!” he yelled. I came over, and after asking where the bathroom was, I said, “There’s a quieter one downstairs in the basement, follow me.” It was perfect timing because, incidentally, Janet started her shift, and I was due for a break.

He followed me downstairs.

I grabbed his hand and interlocked our fingers so he could easily follow me through the crowd. I could feel how warm and strong his hands were, firmly gripping my little soft fingers. Ordinarily, I would never do this, but he was perfect. We got to the basement door, and I turned on the light. We started to walk down the stairs. The sounds, once blaring, now muted, and the silence started to make me nervous. I led him to the bathroom to clean up. While he was walking inside, I see a bottle on a shelf and crack it open. I took a swig, and simultaneously, the silence around me started to ease me and made the setting even more perfect.

He opened the door, and I was standing in the doorway.

I gently reached out to pet his chest, and likewise, we both made our way back inside the bathroom. “I started to make my way down to his pants, squatting above the floor. My pussy so wet you could feel it through my jean shorts. I knew this would have to be one of my oral sex confessions. “Have you had many bathroom blow jobs?” I asked. He shook his head no, and I opened up that zipper to find this beautiful massive cock. My pupils dilated. I pressed my lips to the tip of his cock and finally…