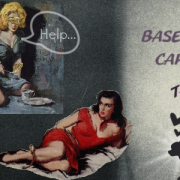 Hello, my sexy perverts! This week, both of our captive related series is coming to an end. I’ll be wrapping up both my advice for your own basement captive and the sad tale of the stepdaughter sex slave.

Some final words on your own basement captive

Don’t forget that you should be having fun with your non-consensual lover. Fun for you, I mean. Your reluctant girlfriend or boyfriend can’t perform as your sex slave or act engaged and interested when you talk for hours about your opinions and ideas if you don’t at least minimally care for them.

This isn’t a Saw movie or The Silence of the Lambs. So please don’t throw your precious basement captive down a well or chain them to a rusty pipe. This is not to say, though, that you can’t torment them mentally and physically. That’s always fun for you.

Basement Captive – how to torture yours

My personal favorite is predicament bondage – this involves restraining your involuntary life partner so that two positions are possible. Both are uncomfortable, and your captive has to shift between them over and over. Usually, there is a default position that causes muscle stress (i.e., standing on their toes) and the option of another position that allows relief of the pain caused by the first position.

But this is at the expense of an even more painful choice, like clamps attached to the nipples or genitals, which are pulled when the first position is relaxed. Doesn’t that sound like fun? If you’re lucky enough to obtain a second basement captive, predicament bondage can be twice the fun!

With this option, your victims will cause each other pain if they choose a less painful position. I suggest watching their suffering either in person or by a security camera. It is sure to provide hours of enjoyment!

A cautionary tale – Finally, a rescue!

The one thing stepdad didn’t consider in his careful plan was Stepdaughter’s little dog – a yappy little chihuahua named Sammy. Stepdaughter used to take him everywhere in a big purse as if she was Paris Hilton. The dog was the only one that she was consistently nice too.

Sammy had been moping around the house for a few days since Stepdaughter disappeared. That is until stepdad carelessly left the door to his basement office slightly open when he went to work.  Sammy quickly opened the door with his little nose and headed down the stairs. Somehow he knew that his best girl was behind the door at the back of the office.

Finally, some good news for Stepdaughter

He made enough of a commotion that the stepdaughter’s mom went downstairs to check it out. When she saw Sammy barking and scratching at the door, she grabbed a set of keys off the desk and opened both of the locked doors. Sammy ran in and was the first to be reunited with her Stepdaughter.

Yes, the dog saved the day. So, do you think that stepdaughter learned anything from her ordeal? Maybe. Did they ever see Stepdad again? Definitely not. Did Stepdaughter and her mother work to improve their relationship? Hopefully.

And if you want to talk about your own captive sex slave, need a bit of my own special brand of sex therapy, or anything else, call me for the best phone sex you will ever have…