Ass Fucking the Nurse:  A Tale of Halloween Trickery and Treats! 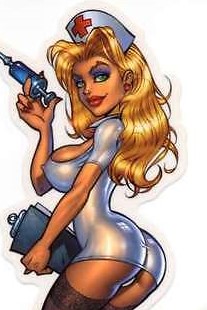 An ass fuck is both a trick and a treat for Jimmy!

My friend Jimmy told me about his recent experience at a Halloween costume party.  He usually doesn’t go to costume parties and he thinks Halloween is just stupid, but his friends convinced him.  Now, Jimmy is relatively inexperienced with sex, and had never at this point dabbled in ass fucking, so this ended up being a very memorable night for him.

He felt someone staring at him and spotted the most beautiful girl he had ever seen and she was dressed in a sexy nurse costume.  She was tall, thin, blonde and gorgeous.  When they made eye contact, she smiled and walked over to him.  His heart began to pound.  Women never paid much attention to him, let alone a smoking hot one like her.

“It looks as if your blood pressure is increasing.  Maybe you need some medical attention?”  she said in her low and sultry voice.   Jimmy chuckled nervously.  Her features were perfection although she was wearing a bit more make up than he thought was needed he didn’t really mind.  It was Halloween, after all and she was the best sexy nurse he had ever seen.

They made small talk for a bit and his confidence started to build, especially when another guy approached her and started trying to chat her up and she told him that she and her “patient” were having a private conversation.   Jimmy was flattered and was getting hornier than ever.

“You can call me Nurse Jackie tonight.” she replied.   She leaned over and pressed her lips against his.  She slipped her arms around his waist and looked into his eyes.  “Want to go upstairs for a little quiet time with Nurse Jackie?”

He couldn’t speak but nodded his head instead. She smiled, took his hand and led him upstairs, through the master bedroom and onto the balcony outside.  Jimmy couldn’t wait any longer, he grabbed her and kissed her passionately, placing his hands on her ass and squeezing.

“Fuck yes.  You have the nicest ass I’ve ever seen.”  he said, kissing her neck.

“I want you to fuck it.  Fuck my ass, Jimmy.”  She turned away from him, leaned the front of her body against the rail of the balcony, lifted her nurse’s uniform and pulled her thong down to her thighs.  She bent forward and looked back at him.  “Fuck my ass, Jimmy.”

Jimmy was stunned.  He had never fucked an ass before but often dreamed of it.  He took his dick out of his pants quickly, spit on it and stood behind Nurse Jackie, ready to take that perfect ass.  He pushed the head against her asshole and pushed it in.

“That’s it, baby… just like that.  This ass is yours, Jimmy.”  she pushed back against him and he felt his cock slip in further.

“Oh, fuck!  That ass is good, baby!  Want me to fuck it?”  He grabbed her hips and forced his cock deeper inside of her.  It was incredible, especially when she kept pushing back against him and tossing her head around, obviously enjoying being ass fucked.

“That was fun, Jimmy.  Let’s go back to the party and maybe you can fuck my ass again later?”  she took his hand and led him back downstairs to the party.  Jimmy was smiling ear to ear and he couldn’t wait to leave with her so that he could fuck her again and again.

His friend Rick walked over to them, smiling.  “Hey, buddy!  You made it!  I didn’t think you would.”  He smiled and glanced over at Nurse Jackie.  “I see you met Glenn.”  he nodded towards her.

“I’m Glenn.”  Nurse Jackie said, smiling deviously, with a much deeper voice than she used before.

“A man?  Yes.”  Glenn smiled and kissed Jimmy’s cheek.  “It was a trick but definitely a trick too, wouldn’t you say?”

Jimmy was upset but not too upset.  He got over it very quickly and went home with Jackie/Glenn that night for more ass fucking.  It was too good to resist!