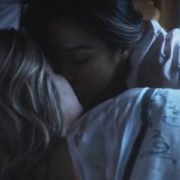 This isn’t one of those 2 girls try amateur lesbian sex for the first time, but rather how a lesbian seduced a straight girl. If your familiar with me then you know I love pussy! And I’m no stranger to the world of lesbian sex. I’m by far an amateur but my friend Chrissy was the straightest girl I hung around with. So how does a straight girl end up with my tongue inside her you ask? Keep reading because I am about to share all those juicy details with you! See, Chrissy use to be an innocent girl, married with a child and seemingly calm life, well until she started hanging out with me. She had no car and had to get rides to work with me. Believe it or not my first intentions were not sleep with her, I just thought I’d help a struggling girl out.

She was so innocent I never even heard the girl curse, she didn’t smoke nor drink either. Chrissy was more on the slender side with small but perky tits. She had a cute little bubble butt and was by far attractive. Of course I’m wild so whenever we would get out of work she had to tag along with me because I was her ride. She saw me engage in various sex acts. At first she was bit embarrassed by how I would do naughty things right in front of her. I gave a blow job right in front of her. And I even fucked some guys right in front of her. She was a quiet shy person but one day she opened up to me about all the sex I was having.

Poor girl had never even know their were other sex positions other than a man on top. Yes it’s true! And she even asked me what an orgasm felt like which tells me she had never had one before. Once you have an orgasm you never forget it, right? I felt the attraction for Chrissy and I even started flirting with her. But being so inexperienced she had no clue my actions were passes at her. One night after leaving work I met up with one of my sex partner whom was a girl. This was Chrissy’s first time seeing 2 girls together.Now this amateur lesbian sex story is heating up huh? So Chrissy now sees my actions were passes at her. She made it clear it from there she is entirely straight and soon after I gave up trying.

But one night Chrissy caught me and Stacy fucking in the work bathroom and unbeknown to us she watched us. After that night her curiosity peeked. I noticed a change but pushed away her flirtations because I thought she was fucking with me. Everything about her started to change. She moved out of her husbands home and got her own place, and even updated her wardrobe. Yes, I noticed her legs right away because she always wore jeans but now wears mini skirts and sexy heels.

This particular night of the amateur lesbian sex I am referring to I dropped her off at her house and she invited me inside. She said she wanted to “show me around” but we found ourselves in her bedroom. And she starts telling me I should sleep over so I won’t have to drive all the back over in the morning. I agree without knowing what was soon about to happen. There wasn’t a guest bedroom and I offered to sleep on the couch but she insisted I slip in her bed with her. I’m not going to argue with that, would you? So laying in bed I feel her hands touch my sides. She asked if I still wanted her, and that I could have her. Chrissy insisted she wanted to feel what Stacy felt.