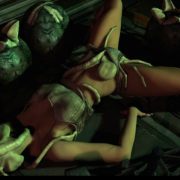 Somewhere out there, in the vast, infinite cosmos, there is an Alien Breeding program waiting. An empty womb is getting primed and ready for implantation. I’ve often looked to the skies late at night and wondered if there is some sort of (kinky?) life looking down at me. It wasn’t till I drove through Roswell, New Mexico while on vacation that I found out the truth.
I stayed at one of those little quirky roadside spots. It had a theme related to space, as all things do in that area, but all I wanted was sleep. Until about 2 am, I thought I found the perfect quiet place to get some sleep. A small knock on the door startled me. Who the hell could be waking me up in the middle of the night? In the middle of nowhere? What I found dropped me to my knees.

Three little men stood there. None of them even resembled a human other than the massive vein covered cocks between their legs. They wore no clothing, but all had cocks over a foot long. I tried to scream, but my mouth opened and a cock pushed itself inside. I was being throat fucked by ET. What the fuck? What’s even worse is that I found myself beginning to enjoy it.

And the idea of an alien breeding program, featuring ME got me even more turned on!

That massive over sized alien dick seemed to drip a fluid that gave me the ability to deep throat him. He was so big, and yet, I never choked once when his cock went down my throat.

They tossed me on the bed, chattering between each other while I shivered and shook in fear. I wanted those massive cocks and that’s what shocked me the most. Who would want a long green dick that dripped alien pre-cum? All her life she believed little green men to be fake, but right now, she knew it was all real. Small heads, big feet, long arms, and dicks so big she feared them inside of her.

The little green men from space seemed to know one word of English. They knew that their mission was to breed with the human and produce children. Didn’t their own kind have pussies and the ability to carry a baby for them? Maybe they just liked the ways a human felt compared to a little green woman.

All night long they filled me with sperm, my pussy swelling each time they blasted another load inside. I’m not sure when the alien breeding stopped, but I woke up with a pregnant belly and the movement of babies.

I’m so afraid to tell anyone about the pregnancy, but I know I can’t hide it. My belly is growing bigger by the hour, and there seem to be multiple babies. What is the world is wrong with me? I want to go back to Roswell and I hope they will knock me up again.