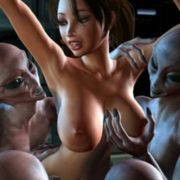 Alien abduction sex – yes, it is time for another of my kinky scifi stories! By now you must know how perverted my geeky mind works, especially when it comes to alien breeding and such!

I remember the first time I experienced alien abduction sex. It’s almost as though it happened as if it was yesterday.

It took place while I was visiting my aunt and uncle in the country. Life as a sophomore in a big city university was stressful. So I thought it’d be be nice to get away from things and help on the farm.

Fine, I’m kind of lying. The truth is, there was a muscular farmer who lived next door.

And I was definitely going to partake in a naughty roll in the hay with him… Literally and figuratively!

That was my goal when I arrived. It was also one of the reasons I slept with my window opened. No, it wasn’t because I was expecting to have alien abduction sex. You see, Aunt Gertrude and Uncle Harry often left to attend overnight farmers market meetings. Open windows would make it much easier for my hot neighbor to hear my loud orgasms.

As usual, I slept in panties and a matching silk tank top. The covers were thrown back as I furiously fingered myself with my panties to the side.

As soon as I came, I felt a breeze kiss my naked limbs and a strange sound, so I woke up to shut the window. The ecstasy of my orgasm was still clouding my mind. For a brief moment, I thought that maybe the sexy farmer was there.

“Helloooo!” I purred to him.

Another weird sound echoed. And it definitely did not belong to the muscular farmer on which I had a crush.

At that point, alien abduction sex was the last thing I expected to happen.

There were some strange lights, however. They were so bright that I thought it was morning and had overslept. That meant Auntie Gertrude and Uncle Harry would be on their home soon. Ugh. Then I realized that the light was blue-ish white and not the yellow of a clear morning.

Huh? Hopping out of bed, I went up to the window to see what the fuck was going on. I hadn’t gone three steps before there was a bright flash that stung my eyes. Were there strange silhouettes in front of me? They appeared to be very small, thin-limbed people with large heads in my bedroom. What the f… Then my vision whited out entirely.

The silhouettes definitely did not look human, and the thought of abduction alien sex suddenly popped into my confused mind.

When I came back to consciousness, I was lying in a bed, but it wasn’t the one belonging to my aunt. It was more like a hospital bed and I had wires attached to my forehead, arms, and legs. I felt afraid, but at the same time, I was calm.

“Hi.” A warm voice came from somewhere above me. “We’re not going to hurt you. You, in fact, might experience some pleasure. We’re examining you for the purpose of getting to know your species. Relax, and this will be all over in a few minutes. When you awake, you’ll be refreshed and this will be like a dream.”

There were a series of light blue and green pulses up and down the wires to my arms and legs. Then my body was suffused with liquid warmth. I started to ask a question and that’s when I realized the warmth was settling between my legs.

I looked down and noticed for the first time that I was completely naked.

My breasts were perky and exposed as cold air was blown to perk up my nipples. And my panties were down to my ankles, revealing my smooth mound and pink slit. My clit was visible – quite visible, actually. It was pink, engorged and ready to be rubbed…. Especially while experiencing kinky alien abduction sex!

That’s when I felt my cunt opening on its own. The feeling of a strange, hard substance thrust inside me. I gasped in pleasure.

Heat began to fill my twat but I couldn’t see anything. Jolts of pleasure radiated up and down my body as my nipples grew large and larger.

Did my kinky alien abduction story turn you on? Stay tuned for part II and call me at 1-888-413-5974 for scifi impregnation phonesex!