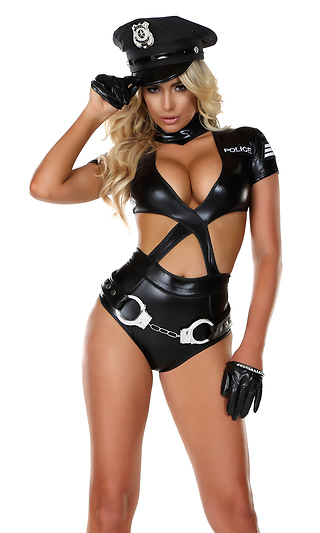 This taboo abduction story is about a cop on patrol. She gets a call in about a suspicious individual in a very odd neighborhood. The neighborhood is all but deserted. Just outside it is some woods. It’s dark, late at night. No one is around. It’s quiet. She drives slowly, looking around warily.

She sees a man walking casually around a building, headed toward the wooded area. So she pulls her cruiser around the corner and gets out. Slowly she follows the mysterious guy, looking around, listening for him. Eventually, she comes to a clearing in the woods. She doesn’t see him, but she does see a van in the middle of the clearing. At the far end of the open space is a dirt road.

Slowly she draws her gun and investigates this random van in the middle of nowhere. The cop holds her gun out in front of her. “Police! Is anybody out here?” She demands, shoulders back, very stone-faced. After she checks the passenger and driver’s side windows she circles to the back of the van.

Halfway to the rear of the van someone jumps out and tackles the officer to the ground.

Her gun flies out of her hand as she falls to the ground, stunned. Grabbing her hair with one hand and wrapping his arm around her waist with the other he hauls her into the back of his van. In a fluid motion, he tosses the cop’s belt and other items to the ground outside of the large trunk. He closes the van doors, looking very pleased with himself. Using zip ties he fastens her wrists together.

Of course, she’s struggling the entire time, withering under his touch, kicking at him with her free feet. But for all her training and all her strength, she’s unable to fight him off. And he relishes every minute of it! “Get the fuck off!” She growls. He says nothing, instead, he undoes his pants and pulls out his hard, throbbing cock. He pulls her to her knees.

“Suck it.” He growls in a loud whisper.

His breathing is heavy and enticing. She clamps her mouth shut tightly and shakes her head. Glowering at her, he presses his cock firmly against her lips and yanks her hair down. As a result, her head snaps back and her mouth opens. He takes the opportunity to shove his cock deep into her mouth. It slides down her throat and the officer gags on it. Drool runs down her chin and her eyes start to water as she chokes on his pulsing cock.

Then he pulls his cock out of her mouth. He rips open her uniform, pulls her tits out of her bra, and presses his cock between them. As he fucks her tits, he squeezes them together. He growls in pleasure, his cock pulsing faster.

He explodes inside her, his release a glorious mess that drips down her pussy. He pulls out of her, puts a collar on her, and ties her to the van. Then he slides into the driver’s seat and takes off down that dirt road, the police officer still in the large van trunk…..thus begins her true abduction…..

This is part one of the abduction…..