A Kinky Halloween Prank Turned Into Some Naughty Fun! 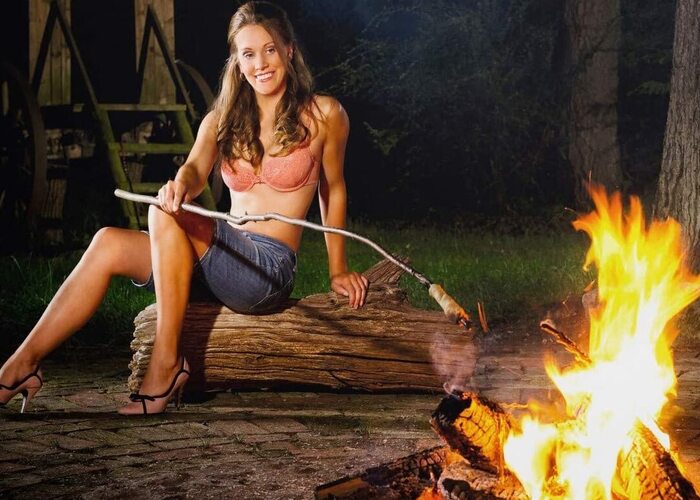 I love this time of year.  The leaves are changing.  And the weather is getting cooler.  Of course, there’s my favorite holiday:  Halloween.  Which means lots of scary movies.  And I love being scared.  The jump of your heart and the little thrill, it totally turns me on.  So, when someone pulled a kinky Halloween prank on me, I wasn’t surprised that it led to some naughty fun!

I had decided to get into the Halloween spirit

There was nothing about this cabin that screamed kinky Halloween prank

In fact, it was very barebones.  Just the way I like my mountain getaways.  There were a few other cabins nearby, but I didn’t see any activity.  I imagined I was probably up there all alone as everyone else was focused on Halloween.  Perfect for me to relax, have a campfire, maybe watch a scary movie or two.  I quickly unpacked the firewood from my car and started setting up a fire in the fire pit.  It wasn’t long before I was lounging in my chair by a roaring fire.

A kinky Halloween prank was the furthest thing from my mind

But I was in for a surprise.  I was watching the fire crackle and looking up at the stars.  And that’s when I heard it.  The crack of a stick in the woods nearby.  I’m a city girl, so sometimes wilderness can frighten me a bit.  But I brushed it off as just an animal and went back to focusing on the fire.  And that’s when I heard another snap of a branch.  Followed by the sound of footsteps clearly crunching the leaves right behind me.

What I saw when I turned around took my breath away

There was a man standing right behind me! He was dressed in dirty overalls.  And he was wearing a mask! I stood up and opened my mouth to scream.  But before I could, he grabbed me and threw me over his shoulder.  I began kicking and screaming, but he held on tight.  My heart was beating wildly.  This didn’t feel like any kinky Halloween prank to me!

He walked slowly to my cabin door and kicked it open

And he dropped me right on the bed.  I started backing up toward the pillows to get away from him.  And that’s when he stopped and stood completely still.  Then he said my name.  I was startled.  How did this stranger know my name?  Slowly, he began to lift his mask off.  And it was my neighbor!  Immediately, I stood up and start hitting his arm.

“You scared me!” I exclaimed, while he grabbed my wrists and held them over my head.

“That was the whole point,” he said and laughed.  “I couldn’t wait all night for that pussy. Happy Halloween!”

With that, he pushed me back on the bed and unzipped his overalls, pulling that big cock out for me.  I dropped right down on my knees and started licking and sucking on his hard cock.  I should have punished him for pulling a kinky Halloween prank on me like that.  But I can’t resist a cock right in front of me.  And truth be told, the whole scene had made me a little wet.  Soon, he was on top of me, pressing his cock into my tight pussy.  At least this time when I screamed, it wasn’t in fear.

Want to have your way with me during some taboo phone sex?  Call me!