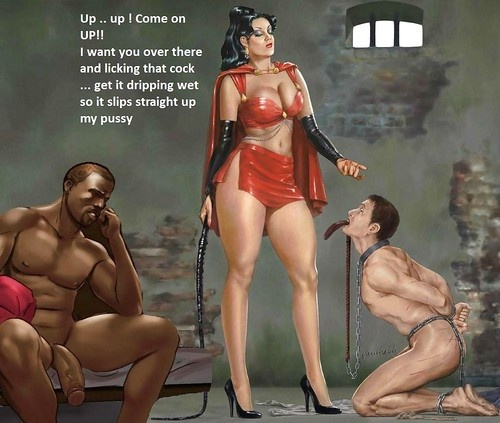 I get a call on Sunday from my sissy cock sniffing faggot and he was all fucked up, and when you’re fucked up, you know, you’re pretty honest about what you want. He tells me he found a guy on CL and texted him to come over so he could suck his cock….hahahahaha! So many times I’ve told this pathetic sissy he was a cock sucker, but he always whines in his little sissy voice that he “loves pussy” Well, if you loved pussy so much, you wouldn’t be texted a Bull to come over and violate your mouth now would ya?

So, I told him what he was going to do, how he was to kneel in front of that massive cock, and worship the man meat he craved, and he was willing and even a little excited. I told him not to pussy out, that it wouldn’t turn out well if he pussied out. Did he listen…nope. The guy comes to the door, knocks, and little sissy hides. What a pud!! He said he tried to call me, but I was busy with a real man making me squirt, so all he did was hide. Finally, after the Bull was banging at the door, pissed of course, he opens the door, and the Bull slams in, grabs him, slams him down on the bed and proceeds to force fuck his mouth with every inch of that thick Bull meat!! After he shoots his load into my sissy’s mouth, he steps back, and looks at that used up cock sucker and says, (and I’m paraphrasing) “You sure do have a nice mouth”

Talking to him afterwards, hearing his humiliation, and how he tried so hard to convince me that he loves pussy, is just to funny for me NOT to share what happened to him. Now he’s gonna read this, sit back, rub his little dicky, smell his hand, and try to convince himself he loves pussy when he’s actually craving more Bull Cock.

Hope you enjoyed your laugh, I know I did, and stay tuned, I’m sure there will be more.