As I left the 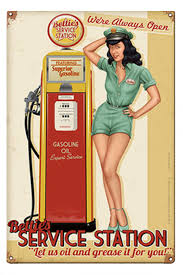 gym this morning, I noticed my car needed fuel. I stopped at the gas station on my way home. As I pulled up to the first pump I spotted a young hottie pumping fuel in to a SUV at the second pump. Dang! I thought, I would love a piece of that hunk. He was barely legal by the looks of it but very well-built body. He looked up and nodded at me when I ran my card at the pump. I was embarrassed I had just been fantasizing about undressing this hot stranger. I smiled and nodded back, and  my cheeks began to flush but I also felt a warm flush in my crotch. I lifted the pump and opened my gas tank door. I am usually very strong and confident this embarrassment flustered me. I had trouble lining up the nozzle with the little hole, took me three times to get it in. I felt stupid then, as I realized he was watching me while pretending he was not. This made me even more klutzy. I kept nervously shifting and changing the nozzle angle as the gas spewed into my tank This would trigger the auto shut off in the nozzle and it would clunk to a stop and I would have to try again. Jeez! I was looking like an inept, dumb blonde to this sexy stud muffin. I just wanted to pump my gas and leave before I died of embarrassment. He finished pumping and sealed his tank cap. Good maybe he would leave first! But no!!! The hot stranger turned and started walking toward me. “You keep tripping the auto shutoff they can be kinda tricky sometime, ” he said with a sexy grin that made a throb start in my panties. Hey keep coming towards me , as I stood with my back facing him, watching him over my shoulder. He came up and stood directly behind me and said, “It’s all about angle” as his hand slid down my arm and covered mine on the nozzle handle. He shifted me a little to change how the gas poured in the tank. As he did this my ass brushed his groin. I exhaled long and hard, I had not even noticed I had been holding my breath. My whole southern hemisphere caught fire and was filled with an ache. I could feel his moist breath on my neck and smell the scent of his body. My body felt weak and all I could think about was sliding his cock inside me and making the ache go away. Then my cougar instincts kicked in, I saw what I wanted and I was going to have it. I purred, “You seem to know a lot about pumping, obviously I need a refresher lesson on the subject. Would you like to follow me home and give me a private lesson?’ He nuzzled his mouth on to my neck and placed his free had on my pelvis pulling me back hard into his stiffened mound of a crotch, whispering, “I would love to”. Just then the pump clicked off, indicating my tank was full. He replaced the gas pump nozzle into the cradle. I climbed back in to my driver’s seat a little shocked I just asked a stranger to fuck me. Before I could think anymore about it, he leaned in my car window and planted the most delicious and seductive kiss on my lips, as he pulled away he said, “I will be right behind you”.

This stranger told her how to pump gas and was about to pump her full too!

We pulled out of the station, and quickly drove the two miles to my home. He parked in my driveway behind me. We exited the vehicle and walked to the house in silence. As I fumbled with the door locked, he came up behind me and started rubbing my ass. That electricity and ache started again. He ran his had up my covered ass crack and I tremble wanting my clothes to be off. The door unlocked and I shoved it open, turned to him and dragging him in by his belt. I barely had the door shut when I dropped his pants to the floor. His cocked sprung up hard and ready, my pussy muscles clamped wanting it inside.  He picked me up by the waist and I wrapped  my legs around him. He had me braced against the wall in the entryway, hiking my skirt up around my waist. He quickly slid the fabric of my panties to the side. Then his cock thrust inside my hot, wet hole, I shuddered. That was exactly what I wanted. He began pumping and boy did that hot, young stud know how to pump…..