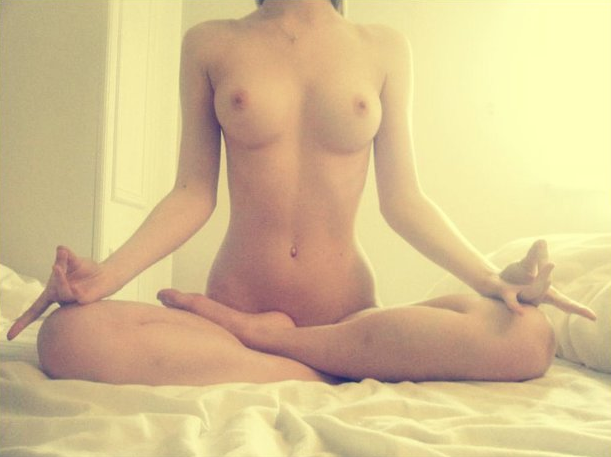 I practice yoga every day at the studio down the street. There’s an instructor in particular to whom I go to every morning. His name is Shane, and let me tell you, he has the body of a God. He’s about 6 foot, brown hair, blue eyes, long muscular legs, tan skin, abs you just want to lick off, mmmmmmmmmm.

So here I am bright and early, wearing my hot pink sports bra, pressed tight against my huge tits, and my new Victoria’s Secret yoga pants I’ve been dying to wear. As I walk in, there he is at the front, greeting people as he does every day. He smiled as I came in, opening his arms, inviting me in for a hug. Good morning I said, as I so excitedly went in, wrapping my arms tightly around his muscular chest. As I could feel his arms wrapping tightly around my waist, the sexual tension grew stronger. We unlatched from each other as I took a step back and grinned, “I’ll see you in class.” I said, as I walked through the doors.

I set my mat down, and proceeded to sit down and meditate as I waited for class to begin.

Several minutes later Shane was ready to start off. He stood at the front of the class, as he proceeded to slide his black v-neck off his tan muscular body, as he nicely folded that and put it to the side, he slowly slid down his black sweatpants, now wearing nothing but his tight little spandex shorts. Must he change in front of us like that? Does he even know what he’s doing to me? I’ve always wanted him so badly. the thought of his thick strong body, brushing up against mine. i could feel my panties get a little wetter.

He started us off in down dog, like always. I’m no newbie to yoga.

I had to find a way to get his attention today. I knew I had to do the pose incorrectly, so that he would be forced to come and help me. I put my hands down on the mat, forming a V with my waist. My tight little ass just pointing high in the air. He saw from a distance that I was doing absolutely everything incorrectly. He told everyone to move on in their sequence, as he proceeded to the back of the room to where I was standing.. He told me to try it again, this time he would help. I got down on my hands again, pushing my ass to the air, there was no way he could resist.

He told me to push my gluts more towards the back of the wall. He gently brushed behind me, grabbing onto my hips with each hand, pulling them back towards his waist. “Like this Elle, you see?”I must admit, I wasn’t paying attention to anything other than the huge bulge I felt in his pants, as he so tightly pulled my hips closer. “Do you feel the tension now?” I so badly wanted to scream out “YES, PLEASE JUST FUCK ME NOW!” He let go of my hips, slowly backed up, and proceeded to move on with class. I didn’t know what to do as my pussy was just throbbing uncontrollably, knee’s trembling.. I wanted him so badly. Right here, right now, I didn’t care if it was in front of all of these people….but there was no way he would go for that.

We proceeded on with the class, but the whole time I couldn’t stop thinking about Shane’s cock.

I wondered how big it was. If it was short, and skinny, or if it was long and thick….how good he was in bed, what his favorite position was… he had me all hot and bothered…

As the class came to an end, and everyone packed up there stuff and left. I walked to the corner where Shane was at to say goodbye. As I approached him, he gave me a slight wink. Almost as if he had known what he was doing, turning me on like that. I didn’t know how to react to this. I proceeded to give him a hug goodbye. He put his arms around my lower waist, slowly moving his hands into the band of my yoga pants. As he squeezed tighter, I could still feel that bulge in his pants, this time rubbing against my pussy.

We let go as he took a step back and said, “Hey Elle, maybe you should stay after class sometime so we can go over the postures a little better.” It was hard to contain my excitement as I smiled and said, “yes.. how about tomorrow…” We both agree, “tomorrow it is!” He said as I walk towards the door.

I couldn’t contain my excitement, as I knew it wasn’t much of a longer wait before I could finally have Shane’s cock… to be continued…

Teen Phone Sex for all your yoga pants fantasies!