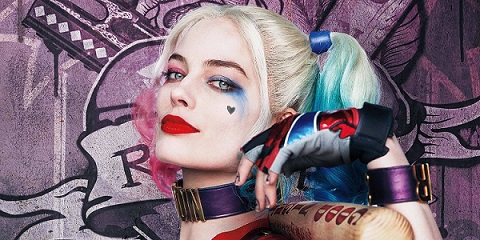 Harley Quinn and Joker walked into the abandoned warehouse they were held up in. A banker from the bank they’d just robbed only a few hours ago sat tied to a chair. He was dressed in a nice suit, albeit a little dirty. The rope held his ankles to the legs of the chair and was wrapped around his chest and upper arms, leaving his forearms and hands-free.

Harley looked over at the captive and smiled, winking, a soft devilish twinkle in her eye. She turned her gaze to Joker, pouting her red lips at him. “Why don’t you go. I wanna play.”

He nodded passively and strode off.

Now it was just Harley and her captive and she looked very pleased with herself indeed. She waltzed over to him with her pigtails bobbing as she went. Her lips curled upward as her toy started to splutter incoherently.

She leaned down so her face was level with his. “We’re gonna play a game, okay?”

He nodded furiously. All he wanted was to go home and get away from this freak show.

“Undo that zipper of yours.” She said, turning around and shaking her delicious ass in his face. He did as he was told like a good boy. “Now, be a good player and jerk your cock for me.”

He did as instructed as Harley swayed her hips teasingly. She took her finger, slid it over the top of his head, scooped up some precum, stuck out her tongue, and licked it off her fingertip. She did it slowly, enticingly. He continued to jerk off his cock eagerly.

Getting to her knees she opened her mouth wide and stuck out her tongue. She pointed to her mouth and he aimed his head at her mouth, unleashing the biggest nut he’d had in a long time. Despite his situation, he couldn’t help himself. She was just so fucking sexy.