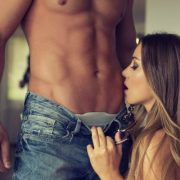 The guys were now fully naked and pointing their huge stiff dicks in our faces. Some of the women shied away at first but I could tell they were loving it. The other women, me included, were really into it. We’d suck and stroke any huge cock that was put in our face! It became a game of who could do it with more enthusiasm. You know this MILF size queen was loving it. The guys were loving it too, of course. All these gorgeous sluts in their tight little dresses were taking turns sucking on their cocks and they knew what the finale was going to be.

Eventually, everyone even the shy ones got down on their knees and sucked a cock or three. The alcohol definitely loosened everyone up. I could tell this group of sluts wanted more. That’s when the guys began stripping all our clothes off. I willing and eagerly stripped my dress off hoping the others would follow my lead. As I stood there naked, I glanced over at my best friend. One of the guys was sucking on her big titties. She didn’t even hesitate when he stripped off her dress. I knew right then I had given her a night to remember. With a little encouragement from the guys, soon all of us were stark naked.

So, I grabbed one of the guys and had him lay in the middle of the room. I led my best friend over to him and told her that stallion was all hers. She excitedly bounced up and down on his massive cock. Then I grabbed the other two guys, one shoved his cock in her mouth and the other entered her ass. Her moans were muffled by the huge cock in her mouth but I knew she was having the time of her life. We all watched and cheered her on. Most of us were rubbing our juicy pussies and cumming along with her. The others were still taking turns eating each other out.