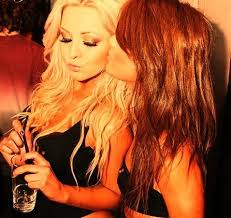 I didn’t know I was a lesbian until I fucked my best friend Chloe.

Chloe and I have been together since we were in diapers. We’ve been on the same soccer teams, we go to the same catholic school and this year we are going to sleep away camp together. It’s more like a week long retreat since we are 16 now, but its the same concept: hiking trips, making s’mores, and singing campfire songs.

Father Matthew was the group leader and every morning at breakfast we would pray together, holding hands. Chloe’s hands were super soft ever since she switched to that new lotion, so I was feeling up her hand that morning. Later we went to the lake to go swimming. I was wearing my red two-piece and Chloe had on the sexiest white and pink polka-dotted bikini on. It was a little snug around her hips and when she came out of the water, you could see her camel toe. I never noticed how curvy her body was and now that her body was soaking wet, I could see how perky those sweet tits of hers were.

My clit started aching all of a sudden, and visions of her pink pussy in my mouth appeared in my head.

The mere thought made me so wet I had to dive back into the water to cool off. I swam under water and headed over to Chloe. I jumped out the water and gave her a big splash. She yelped and got mad that I got her hair wet and she started splashing me back. The water looked so refreshing as it slid off of her smooth pale skin.

“Are you done looking at my boobs or are you going to stare at them all day?” She jokingly asked. I didn’t even realize that I was staring, I didn’t mean to be obvious! Embarrassed I choked out “No one’s staring at those A-cups!”

“Girl, you know I’m at least a C”.  She grabbed her chest in her little hands and gave those tits a nice squeeze.

I bit my lower lip and gazed at that beautiful sight. I had to make my move tonight.