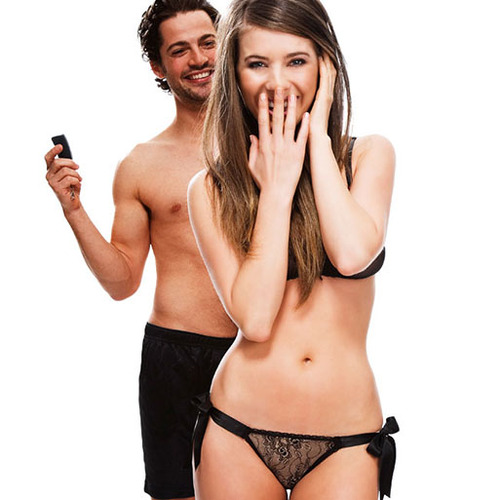 Vibrating panties definitely weren’t the gift I was expecting so I was especially excited when I opened the box.

He had given me a pair of black Vibrating Panties. They were so cute and I got naked then slipped them on, making sure the vibe was on full speed. As soon as they touched me the vibrations tickled my pussy and I started to get wet. John was still dressed and he watched as I gasped and giggled, running my hands playfully over my tits. “It feels so good!” I told him as my pussy got teased by the Vibrating Panties and I wanted him to feel good too.

I stood in front of him  and he put his hand between my legs.

Pressing my vibrating panties against me. I couldn’t breathe as they rubbed and teased my pussy. When he finally stopped I was ready for him. I dropped to my knees and undid his jeans as he put his hand on my head. I took his dick out and held it as I licked along his shaft. He felt heavy and warm on my tongue as I moved it over him and he got harder as I rubbed my tongue over his head.

I cupped his balls in the palm of my hand as I put my lips over his head and slid down. I breathed through my nose as I swallowed him down and only gagged a little bit when he hit the back of my throat. Then I relaxed and started moving up and down, my wet lips around his dick as I sucked on him. He smelled lightly musky, which is such a sexy manly scent and I went faster. John moaned and I slid lower, taking more of his dick.

He went down my throat and I felt a rush of panic as I couldn’t breathe for a second then calmed down.

It’s so weird when your body loses control like that but it’s not enough to stop me from doing it again and again. I sucked him hard and slow, swallowing every inch of him as he rocked his hips forward. My throat feel bruised and my lips were all stretched out as I kept going. My fingers kneaded his heavy, full balls as my mouth worked him and he grunted as he pushed my head down on him. His balls pulled up and I stopped deep throating him, keeping him firmly in my mouth as cum shot out of him. I was able to swallow every drop of it and I felt it slide down me.