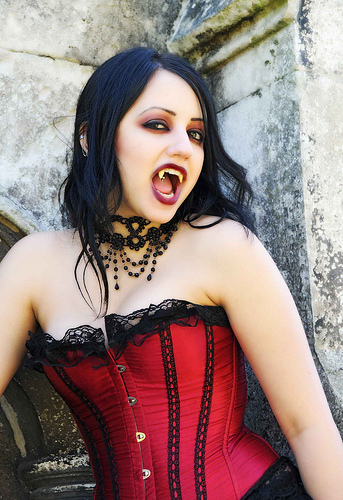 Vampiress – A Sexy Creature of the Night – Even the Hunter Craves Her!

Vampiress – a female vampire and the fantasy of your dreams. Elegant, sexy, alluring. She’s everything a man wants. Even the vampire hunter. No, no, NOT Twilight at all. This is much better because she was transformed into something beyond human.

Imagine it’s night and very dark. No moon so a hunter is out, stalking his prey. Above him in the shadows awaits the vampiress. She is absolutely stunning as she leaps to the ground. The hunter is no fool and he grabs her as she falls, pulling her to the ground and landing on top of her. As she tries to bite him, he pulls out a dildo, placing it on her inner thigh very close to her pussy. Since it’s her first encounter with it, its magic is much stronger than normal. She passes out and becomes mush in his arms.

The hunter picks up the unconscious vampiress and loads her in his car. He takes her directly to his abode.

When she wakes up, she’s tied to a slave driver and completely naked. She pulls back her lip in a defiant, angry snarl, showing off her pearly white fangs. The hunter sets down his glass of wine and comes over to her.

“Release me!” She growls with so much venom in her voice.

Her only reply is a low hiss.

“Now, now, no need to get so nasty. We’re going to have a bit of fun tonight. Don’t worry because I know you’ll submit to me in time. Yearn for me even.”

The vampiress barks a laugh and smiles wickedly. “I think you certainly have delusions of grandeur.”

Sliding himself on top of her, he places his throbbing hard cock against the opening of her ass. She gasps as he pushes himself into her tight ass. He pumps her until he explodes inside her…..