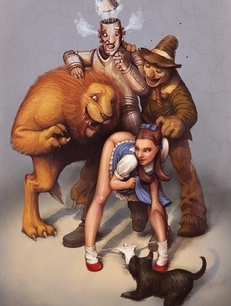 Dorothy was more than just the sweet little girl from Kansas. She was actually a runaway with a history of being the town slut. The real sex story behind what made young Dorothy Gale leave Aunt Em’s home will make your cock throb and your mouth drop.

Dorothy was a young teen when her urges began to get the best of her. Aunt Em was bringing fresh milk in from the farm one Sunday afternoon when she caught a glimpse of Dorothy on her knees sucking her uncle’s (Aunt Em’s husband) cock. Aunt Em became furious of course and kicked young Dorothy out of the house. She told her that she was a slut just like her mother. Then told her that she was to never ever come back!

While being chased from the house, Dorothy ran and tripped over a large rock, hitting her head hard on the ground. When she woke up she found herself in a strange and beautiful land and the story pretty much unfolded like it’s always been told up until Dorothy and her new friends finally get in front of the Wizard.

After their journey through the forests and overcoming the many obstacles in their way, Dorothy and crew found themselves in front of the Wizard.

Dorothy begged for his help to get back to Kansas. The scarecrow begged for a brain. And… well you know the rest. After hearing their pleas. The Wizard decided that the only way he would help them was if they performed certain duties for him.

He instructed Dorothy to pull down her panties and bend over a chair. Dorothy being the free spirit that she was, didn’t hesitate. Her friends (lion, scarecrow, and tin man) were confused and amused at the same time. All of them thought Dorothy was beautiful and now her pussy was on display for all of them to gaze at. The Wizard then told the companions to take turns having sex with Dorothy one by one until they blew their loads.

The scarecrow went first. His hard cock fit perfectly inside of Dorothy’s hot young pussy. But, he didn’t last long because she was so tight. He came almost as soon as he entered inside of her. Then it was the tin man’s turn to have sex with her. Of course, he had to oil his long hard dick before he slipped inside of Dorothy. He fucked her for a long time, squeaking along as he pumped her full of his oil and semen. The scarecrow jerked his cock off and came again as he watched sweet young Dorothy get her pussy bludgeoned by the other horny characters.

When it was the lion’s turn he said he didn’t have the courage to fuck a girl as beautiful as Dorothy. The Wizard yelled at him. He told him that he would never grant his wish if he didn’t fuck Dorothy without mercy. So the lion pulled out his huge animal cock and shoved it into Dorothy’s tight little ass.

He fucked her hard and roared as he blew his lion load inside of her tight asshole.

The Wizard still wasn’t pleased. He said that they didn’t do it right. He went on to say that the only way he would grant any of their wishes was if they stood around and watched him have sex with Dorothy for himself. Revealing his true identity, the Wizard stepped from behind the curtain and forced Dorothy’s mouth on to his pre-cum dripping cock. She gagged really loud as he slammed his wizard cock into the back of her throat. The Wizard wanted make Dorothy’s pussy squirt three times. That was the only ways that she was going to get her wish.

So he threw her onto her back on a mattress he had in the back. He fucked her in her fresh, pink, pussy as her friends looked on. As his thick cock licked the insides of her pussy and tantalized her g-spot Dorothy arched her back, licked her lips and squirted three times all over the Wizards dick. It was truly MAGICAL!

Dorothy and her friends got their wishes granted. The Wizard busted the biggest nut of them all, and they all lived happily ever after…

But not before the Wizard instructed the munchkins to drop their loads inside of  Dorothy too! I’ll save that story for another time.

Call us for HOT PhoneSex tonight!