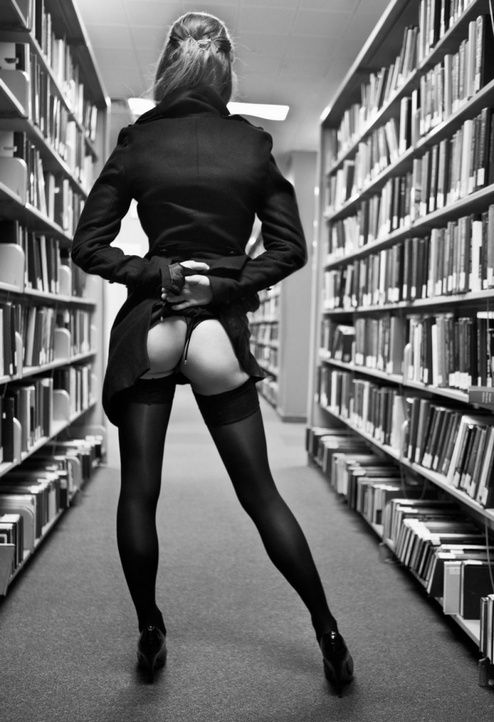 Most people would not consider the library a place to pick up anyone. You know, before this experience, neither did I. Being a huge lover of foreign films, I knew I could always find a good one on their shelf. So, after a long day of work, I decided that I would swing by and see what I could find. It was cold outside and I just wanted to snuggle on the couch in my favorite boy shorts and watch a good movie. As I was browsing and minding my own business, I could not help but notice this very attractive man casually walk up to the same section. Neither one of us spoke at first but it wasn’t long before he started conversing with me.  At first I hadn’t noticed just how attractive he was, I was lost in those sexy biceps and glasses he was wearing. He told me that he was new to the area and didn’t know too many people. Apparently, he was a retired Marine. All that was running through my mind was how quick was he going to rip my panties off and fuck my slit! This guy was hot, not just in the physical sense. The way he spoke to me made my clit throb. The conversation lasted about 10 minutes, although I was focused more on him than what he had to say. I did not care. At this point, I just wanted to get fucked by him. I was shocked at the direction our conversation was headed. He started talking about this foreign film and how the sex in it was beyond anything he had ever had. I could not resist any longer. I looked at him and asked him when the last time he had a good fuck was. He told me today. I was shocked. I figured that he had a girlfriend or wife, but really, who cared. He told me that I was his latest and greatest fuck. At first I was caught off guard but when he tossed my body against the wall, I knew what was about to happen. This guy that I did not even know was about to give me exactly what I needed. He started kissing my neck, being very careful to not miss a spot. The way his lips touched my skin sent chills up my spin. I felt his hand making its way to my pussy. This guy was not about to waste any time. Pressing his body up against mine, he pulled my skirt up enough for me to wrap my leg around him. The only thing separating my pussy from his throbbing cock was our clothes. He unbuttoned his pants just enough to pull his fuck stick out. He reached down and grabbed my thong, pulled it to the side, and began ramming his rocket deep inside of me. I wanted to scream out, it was better than I had even thought. He reached up and covered my mouth. Harder and harder I felt him jam his cock inside.

How does this story end? Hmmmm…I guess you will have to find out for yourself. Do you like public sex? That kind of sex where you are living on the edge, unsure if you are going to get busted, but that will not stop you. Do you have your own naughty story you want to confess? You can share all of your naughty secrets with me.