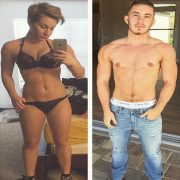 A transformation sex humiliation party really gets the juices flowing on a cold winter’s night and I’m just the randy chick to bring you along as an embarrassing little appetizer!  I waited for Erin’s office party and I was his plus-one.  What else is a sweet little panty boy to do for a date? I mean, it’s not like he can just march his lingerie wearing ass in with a MAN now, can he?

So, he was stuck with me, the Queen of Mean! And I sure know how to dole it out.  “She’s” seen me in action once before. Guess it didn’t scare her enough. Additionally, this was going to be a party within a party and she wouldn’t have anything to hide going forward. Giggle.

Somethings are BETTER out of the closet!

I’d been Erin’s beard for years now and I had begun picking all of her naughty dainties worn beneath the trousers, sensible shoes and neckties. Recently, I’d gotten a cheap thrill out of watching his face as I pushed him out the front door to go to work.  Indeed, he had to be twitching a little with every step he took.  And no doubt, he must have believed that everyone knew what was in his pants; and I do not mean that pathetic cock of his!  No one thinks about that thing… ever!

Right after work, I had a little party and only invited the men from the office.  Oh, they all knew what was going on with Erica; strutting around the office like a chick in heat. ‘Her’ ass always angled up as in easy entry, up!  So, they were all chomping at the but to see ‘her’ out of “boy” clothes.  They wanted to see what held back the sloppy wet spot that every day made its way to the inner edge of those chinos!

When we arrived, I took Erin from the car and blindfolded her, then led her inside.  I could feel him begin to tremble but we continued moving forward. This was a party that was long overdue.

Lush sex stories aren’t made, they’re BORN of lusty sitches just like this one!  Stripping him naked made him twitch every time he was unexpectedly touched.  I never felt closer to ‘her’ than I did when she was under my complete control. He heard the male whispers and struggled for just a moment.  I whispered close to Erin’s ear, “Welcum to your very own ‘Transformation Sex Humiliation Party’, Baby-girl!” Just then, I pulled the strings on the blindfold and saw his face in awe, his mouth agape.

He looked at me and the tears began to flow.  “Oh, Mistress! For me? OMG! I can FINALLY BE THE GIRL I REALLY AM!” She practically screamed it into the crown who then let out a huge cheer for her!  I called for the names of Erin’s bosses in order of importance, announcing that Erin’s ass was up for grabs (and everything else. lol) to the most important men who could further her career.

Father Time wanted to have his dick wet first.

“Come here, girl!” the chairman of the board bellowed. “It’s not a transformation sex humiliation party if you aren’t at least a little bit humiliated, right? So, part of your deal is going to be making you into a real girl. Now. Tonight. Here, while everyone watches.”  He pulled his considerable cock out and bounced it across Erin’s tight ass cheeks. “Turn around, bitch!  Daddy needs his knob polished. And no one likes a lazy mouth bitch. So, do it good. Got it?”

Erin delivered an Academy Award-Winning cock-sucking job, spit dribbled out, perfect slurping sounds, oh, and I can’t forget the gulping! My word! Furthermore, the slurping sounds made my pussy slicken and drip.

You don’t need to be ready. You’ll never be. Let go and let me! Giggle.

Phone sex sites that make you tingle aren’t everywhere. You can only find THAT, here, with me. Wanna be tempted by the things I’ll do to you, Call me.  I’ll take you there.  Just be ready, cuz you’ll never be the same after.