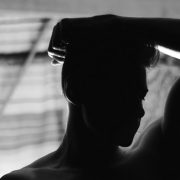 In the first two parts of this three-part series, we described my client’s BBC training program and his tight little boy-pussy.

Clint lives in a quaint Craftsman Style house in a city where the male population is 65% black. His living room is very modern with sleek, funky furniture and lots of colorful art on the walls. It has both masculine and feminine elements. His kitchen is pristine. Stainless steel appliances, a commercial range, double ovens, and a subway style backsplash. Clint is a great cook. He told me his goal is to hold Friday night dinner parties for large groups of black men who would then fuck his tight little boy-pussy until it was full and gaped.

Clint’s bedroom is painted pale blue, and it has a large bed on a platform bed frame.

One wall is a massive built-in bookshelf, and on the other is his dresser. Two big windows face the neighbor’s house, and if the blackout shades are up, his neighbors have a clear line of sight into his room. I told Clint that his shades would stay up and that his lamps would stay on. I want him to give his neighbors a show.

We decided that Clint would refer to his asshole as his boi-pussy from now on and that he would wear a cock cage all the time. I picked out a pink one for him. At the beginning of our relationship, Clint insisted that he would never wear a cock cage, and now, he submitted to complete chastity to please me. I picked out the perfect wardrobe for him. I watched him put on the cock cage. Then, he put on a tack bra.

The bra has a lining with upholstery tacks, and tack bras do an excellent job mutilating nipples and breast tissue.

Clint purchased a sophisticated digital camera and a tripod. Both the camera and tripod were iPhone compatible, and I downloaded apps that gave me the ability to record the sessions and to adjust both the focus and the angles of the camera. I planned on making an excellent video of Clint’s BBC domination session.

Then, I watched Clint insert a big red butt plug into his boy-pussy and pull on his pink satin panties, and delicate camisole, Clint looked adorable. I told Clint to set the Glorious Son’s most recent album on repeat (because I love the band and want to fuck all of them). Clint put a blindfold over his eyes and on his stomach. He squirmed around in bed, waiting for something to happen.

After about 15 minutes, Clint’s front door opened and, two large black men walked into the front door and went directly to Clint’s bedroom.

They did not say a word to Clint. The tallest one (6’8”) grabbed his panties and ripped them off. He inserted two big fingers, one from each hand, into Clint’s tight little boy-pussy. While he pulled Clint’s boy-pussy apart, the other guy reached underneath and pulled on Clint’s metal cock cage. Hearing Clint scream made my pussy so wet! Once Clint’s boy-pussy was torn open, the first guy took out a ten-inch cock and pushed it into Clint with one violent motion. He did not use lube and, he forced that cock into Clint’s tight little boy-pussy. Clint’s screams were blood-curdling and excited me to no end.

They moved Clint onto his back. The first guy put Clint’s legs over his should and pushed right back into Clint’s boy-pussy. The other guy took out an eight-inch cock and forced it down Clint’s throat. When done, his cock disappeared and, his ass rested on Clint’s face. As he faced-fucked Clint, he pushed on the tack bra, and even with a cock in his mouth, I could hear Clint scream. He alternated between squeezing the tack bra until blood began to trickle out. Then, he took a paddle and slapped Clint’s cock cage relentlessly. Seeing Clint bleed and writhe in pain brought me to an orgasm.

To bring Clint’s first BBC breeding session to an end, they put Clint on the floor on his hands and knees.

I can make any fetish phone sex fantasy come true!