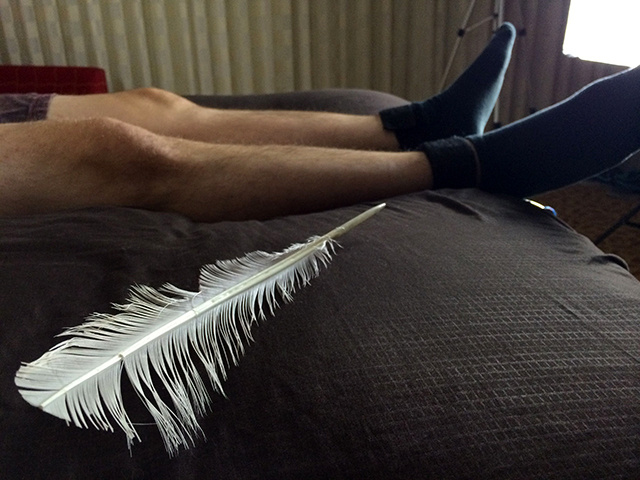 His naked body displayed before me.I held the doubled nylon rope in my hand. I thought to myself “tickling fetish?… this could be fun”. Never had I been asked to do this. I was always the one being tied up. But he wanted it, he craved it and I for damn sure, was going to give it to him.

He was naked. His sculpted body bound with nylon rope at the wrists, and his legs agape at the hands of my brand new spreader bar. I liked looking at him this way. He was the vulnerable one, he was the one who was uncertain, he was at MY mercy, for a change.

I stood at the end of the bed, and slid my black silk thong down over my thighs. His pink tongue rolled over his lips. I climbed onto the bed with him, and let the little string dangle lightly over his face, he moved his head and craned his neck to breathe my scent. I began dragging the silky string along the insides of his biceps, and slowly tapering down his rib cage.

He smiled, and hitched a bit. Oooooo, that was the spot. I moved around the bed, and let my hair fal down over my shoulders. I grabbed a soft lock and began “dusting” his underarm with it. His breath got faster, and he shyed away from me, biting his lip to stifle the giggle that wanted to burst out.

Then I pounced. The pads of my fingers danced along his underarms all the way down both sides. I began tickling him, and I didn’t think I would ever stop. I thought of the spanking he had given me not 4 days before, and I prodded and poked at his ribs, enjoying every second of his uncontrollable laughter.

Then I saw it. His cock was standing at full attention from all of our tickling shenanigans. I thought about how sensitive the insides of my thighs were, my hipbones and the backs of my knees. I worked my way down. I had full access to everything I wanted, compliments of the spreader bar.

I began tickling lightly down his ribs. and when I came to his hipbones. I leaned up and began licking nuzzling and prodding with my mouth and chin. He jerked and squirmed all over the bed. The tip of his dick covered in precum from all the tickling.

He laughed so hard, I couldn’t even understand what he was telling me.