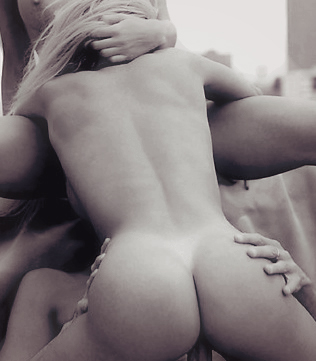 We were sitting at the bar just having a few drinks. We had a few guys come up to us and buy us a few drinks. But none of them really caught our attention. Until this one guy came and sat next to us. He was pretty good-looking. But the best part is that I noticed a huge bulge in his pants. I knew who I wanted to go home with.

My friend was a lot more uptight. She is married with a few kids. So she hardly gets out and when she does we always have to go home early. I was looking for a way to really loosen her up. So far she was just sipping on her drinks and took her time taking her shots. As the night went on I caught out of the corner of my eye that this guy put something in my drink. Now, I have been drugged before. But that’s a story for another time. Anyway, I decided to switch my drink with my friend. I was determined to make her have some fun. After a while, the guy noticed that I was not being affected by the pill he dropped in my drink.

I smiled and told him, “You don’t have to drug me to fuck me.”

Then I told him that I switched drinks with my friend. I leaned over and started to kiss his neck.

Then I whispered, “Let’s get out of here and take her with us.”

I must say she was feeling it pretty hard. So, I decided to get the three of us a cab. We all went back to his place. He made us some drinks and sat down next to me on his couch. I leaned over and started making out with my friend. She had actually never been with a woman before. I moved my hands down and pulled out her tits. I slipped her hard nipples into my mouth and started to flick them with my tongue. She started to moan.