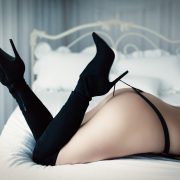 I finally gave up and told him it never ended.

Neither of them knows the truth.

They both looked at me like I was crazy.

But they both know how much I love watching guys play naughty together. They knew I was serious about this. Jesse knows what I like, Without missing a beat he grabbed the handcuffs and locked my wrists to the headboard. They both began to lick my pussy and make me wet. Having Michael get Jesse hard made my pretty pink pussy so wet.

Michael was chosen to suck Jesse’s big cock because Jesse is the cock I want to fuck my pussy. As he lifted my legs up on his shoulders Michael grabbed Jesse rock hard cock and guided it inside my tight pussy. As he fucked me hard and deep just like I like. Michael was licking my swollen clit.

If you liked this one you might like Forced Bisexual Party. It’s All Fun And Games Until Someone Takes It In The Ass. Let me know what you think,