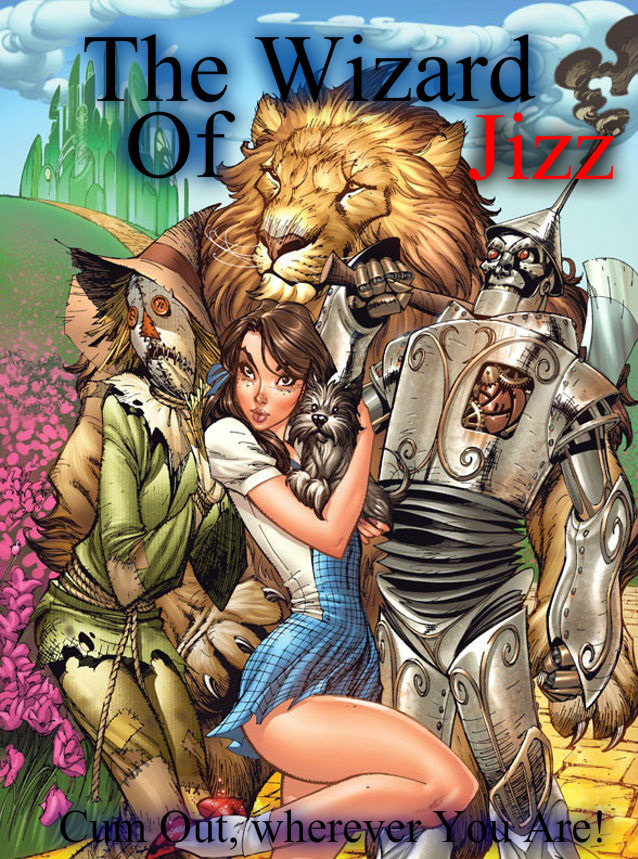 Dot set out on the funky little brick road, just like in the story. But, when she met the first man (Let’s call him the Scarecrow), he was so turned off to women, he could barely look her in the eyes. His heart had been ripped out too many times before to trust that she might like him. But, by the time Dot finished polishing that wood, oh, he was still afraid, but he’d fight the devil himself over that pussy! Haha

Along the way, they met The Tin Man…so called because he was known to have a dick as hard as tin…and he knew how to use it.  He bent Dot over the minute he saw her…Who could blame him? She’s a hot little number. Plus, before she came along…all The Tin Man had to fuck were those stinky flying fucking monkeys.  He jack-hammered her tight, pink, pussy like it was the last he’d ever get…In truth…maybe it was!

Next to be found by the trio (uh…foursome, if you included the annoying little dog too!), was the Cowardly Lion.  He was afraid of his own shadow, but when pushed to it, he could be quite fierce.  He pounced on them and singled Dot out for some King of The Jungle type fucking. What he got…was FUCKED himself!  He had no idea what he had gotten himself into with her. She flipped his kingly ass over and rimmed him for all she was worth (which, for the record…is A LOT!)  He squirt that hot jizz everywhere, coating his new friends with his pleasure sac.

Dot had the idea of scaling the back wall, gaining entry to the castle and seeking the Wiz out personally.  She made her way down the dark, dank halls followed by her cohorts…They followed a low moan all the way to the end of the chamber and slid open the curtain. There was the Wizard of Jizz! In all his naked glory, he stood transfixed at a surveillance picture of Dot, up close…with her fingers shoved deep inside her pussy. Where the hell did he get that?!?  The house behind her looked a lot like Kansas. But, as we’ve all gathered by now…She wasn’t in Kansas anymore.

Dot dropped to her knees and pulled daddy’s big cock from his pants and gave the men with her a show as she spit, slurp and licked all over her father’s huge dick! They were all stroking their own dicks just watching and when she finished swallowing it all, Daddy treated her like the little whore she was to him…Daddy buried that pulsating dick into his little girl every way he could think of!

Dot decided that instead of trying to get back home to Kansas, she would stay with the men who would love, protect and MOST OF ALL – SATISFY her.  She would make Emerald City her new home…A home where she would be worshiped like the queen she was.

In the years that followed, Dot and Daddy made lots of baby’s…all girls.  All of the children are being raised Jewish, just like Daddy. He even asked his little Dot to marry him…She hasn’t answered him yet, but she’s told me what the answer is.  Along with just what it will take for Daddy to seal the deal with Dot. Call me I’ll tell you every salacious detail. Giggle