The mechanic will do anything I want. 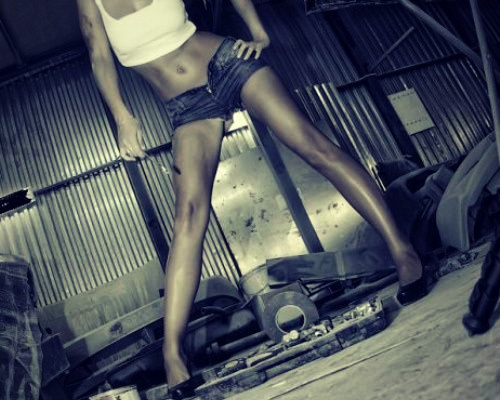 I love muscle cars. I have one myself, and I love the idea of being able to open it up and play with the engine. It’s my baby. However.. I don’t know much about cars, so actually working on it would be a catastrophe. I’m always taking it to the mechanic to have little things done…so.. I figured, why not see if I can flirt with the mechanic? I’ll wrap him around my little finger and make him do anything I want.. 😉

I started dressing up whenever I stopped by – or, well, dressing down. Sometimes I’d throw in a little pair of cowgirl boots just to get his head spinning for me. I knew it was every mechanic’s dream.. A wild-eyed, tan, young girl in a little black tank top, cutoff jeans, and cowgirl boots, standing next to a rumbling muscle car. Seeing the way his eyes lit up every time I stopped by, I definitely knew what I was doing. After a few little visits, he started talking to me a lot more, finding ways to strike up a conversation. And I was always flirting, making little subtle comments that I knew he’d be daydreaming about later.

I held my manipulative ways at bay, though..until one day, I knew he was going to have to work on my car for a while. I made sure to bring it a little later than usual, so he’d be working on it a little past closing, and the other mechanics would be gone by then. I always laid around and waited while he worked on it. But this time, after I noticed the other mechanics leave, I sneaked away from the client waiting area and made my way back into the shop. He heard my boots coming as soon as I stepped into the garage. He probably didn’t think I saw him get nervous and dust himself off as he glanced over.. I smiled at him a little as I got closer, asking him how it was doing. We struck up  little conversation about it, about how I’m always around.. and how it would all be easier if I had a guy around the house to take care of it for me. And on that note, I leaned in just a little, and he took it the rest of the way, standing up to kiss me and slide his hands down my sides..
I ran my hand down his chest, teasing him a little and then pushing him against the car, and it wasn’t long before he was indulging in me. He picked me up against him, sliding off my cutoffs and showing me exactly what I’d been waiting for.. I thought I was going to get him wrapped around my finger – but rather, he was going to make  me his dirty little whore.

Manipulation is my middle name.