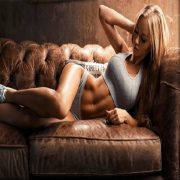 Tease and Denial works perfectly in my marriage because we both cheat; only he doesn’t know it. Oh, I know my husband of twenty years cheats any chance he gets. It wasn’t enough for him to marry me like a hot barely twenty-year-old. He was married to that frumpy woman he was embarrassed to introduce as his.  So, he got me these huge tits. But, unlike her, I keep everything locked right and tight!

So, why then you might ask, would he start playing a game he has no chance of winning? Hell, if I know! But, I’ve never shied away from a game once it’s in play. So, let’s rock!

Try to Teach an Old Dog.

He watches me strutting around the pool a perfect size 6 and a tiny 23-inch waist. And believe me, he sees how the landscapers and pool guys looking and lusting for me. He even comes out there to show them that I belong to him; as if that’s enough to dissuade men from approaching me. I’ve been at this game for a long time. A lot longer than my husband. He must be stupid.

But, it’s okay. I know exactly how to make that dog heel! First, I started fucking men, all of them right where he could see, or hear about it. Then, I took a job doing phone sex and I made him call the number while at his office.

Oh, no! I made him call, as I said. And when he did, he got the naughty, naughty pictures I send out with each call. I could just imagine the look on his smug face at the realization of who he was about to talk to! However, as I watched the call log, I saw our home phone number pop up and I held my breath.

“Hi! This is Dixie!”, I said into the receiver. I heard him breathe, but not speak and cleared his throat. “Dixie, Baby.  What are you doing here?” I took the reigns and fired back shocking us both, “Quiet until I tell you to speak!” He sighed and whispered, “Yes, Mistress! As you wish.” We had turned a page. Yes, Lord!

“You will do as I instruct, do you understand?” He whimpered his agreement into the phone and I continued with some extreme jerk off instructions with a twist.  A very pleasant one. For me!

I guided his hands close to that Happy Ending.

I made him squeeze those cheating balls of his until he moaned and I could no longer tell if it was pleasure or pain. Nor, did I care. His other hand jerked and twisted at his manhood most wonderfully; I wished I had been right there in front of him so I could enjoy it too.

I let it ebb and flow for hours as I made him come so close only to deny him over and again. He begged, plead and promised to never cheat again. But, we both knew he was a liar and that wouldn’t change with a few phone sex sessions, no matter with a whim!

I decided then and there to lock up “the goods”, so to speak. Of course, I know he’s a cheater, but he’s a cheater with lots of disposable income, so what better way than to funnel it back into our family? I made him a regular caller to me and I make him pay just like every other caller.  Occasionally, I require a HUGE tip from him and I keep it all. Call it a little nest-egg for my future. Who knows what can happen in marriage these days?

He’s become a very jealous caller. Especially when he sees the word “BUSY” across my head when he checks the site. I love to give him shocks of tease and denial all day long. Always ending my texts with, “Don’t YOU dare!”

He’s all blue in the balls when he gets home.

Since the start of our little escapades, I’ve ventured into more freak behavior. Now, I get into torture by the group. You know, my Group Sex Stories just kinda fell into place as I stretched my wings! You haven’t lived until you deny yourself your carnal pleasures.