Standing On The Bus Stop, Sucking On A Big Cock 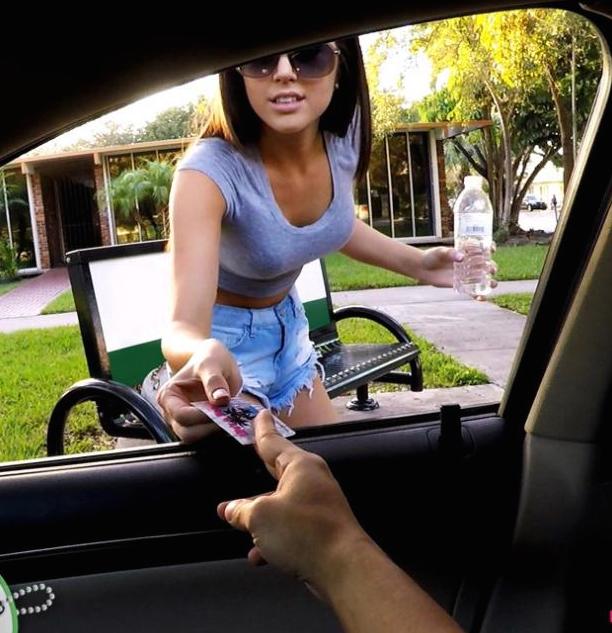 I was having car problems and no one in my family or any of my friends were available to give my a ride to the grocery store. I remember the day so well because it was so hot outside that the meteorologist said that you could fry an egg on the ground. Midwest weather can be treacherous in the summer! So I put on my denim booty shorts, gray crop top, and comfy sandals and made my way to the bus stop. About 5 minutes after I stepped on to the bus stop things went from hot to PIPING HOT!

Of course the bus was late so I sipped my ice cold water and checked my Twitter page. When I glimpsed across the street I noticed a car that had been sitting there with a figure in it for as long as I had been standing at the bus stop. I noticed it because the window was down on the driver’s side and I wondered why anyone would have their window down instead of having the a/c on in hot weather like that. I continued to sip my water. A few seconds later the car started to slowly make a U-turn towards me.

I squenched my eyes to get a better look a the driver. It was a man with dark shades on. He pulled up really close to me and rolled the passenger side window down. I followed his gaze down to his crotch and what I saw made my mouth drop. The guy in the car was jerking his cock off. It big and throbbing. He had been doing it for a while because pre-cum had spilled out a little on to his seat. The guy didn’t say anything. He just stroked his cock and looked at me. I didn’t know what to do or say…at first.

As he stroked his rock hard shaft and moaned with pleasure, I open the passenger side door and got into the car with him. I lowered my head down to his cock and started to lick the slippery pre-cum off of the tip of it. Then I slipped my lips over his cock head and sensually sucked and licked it like it was a popcsicle. He tasted sooooo fucking good! The rush of being in a total strangers car, while sucking and pleasing his cock, just made me wet my panties with pussy juice.

My sucking felt so good that he forced my head down all the way over his cock. I tried to resist the urge to gag, but I couldn’t because he was forcing me to do it. I never said a word. He just moaned with complete pleasure. He pumped and fucked my face so hard that I started sweat. The bus that I had been waiting on, pulled up beside us. The passengers and the bus drive all stared down at what was going on in the car. Their eyes bulged as the gasped at the kinky site before them. The fact that they were watching only made the guy hornier and all of a sudden he stopped pumping my mouth hard and fast and just slammed my head down on his dick as he erupted loads and loads of his hot cum down my throat.

I can be there for you too baby. Give me a call anytime and ANY place!