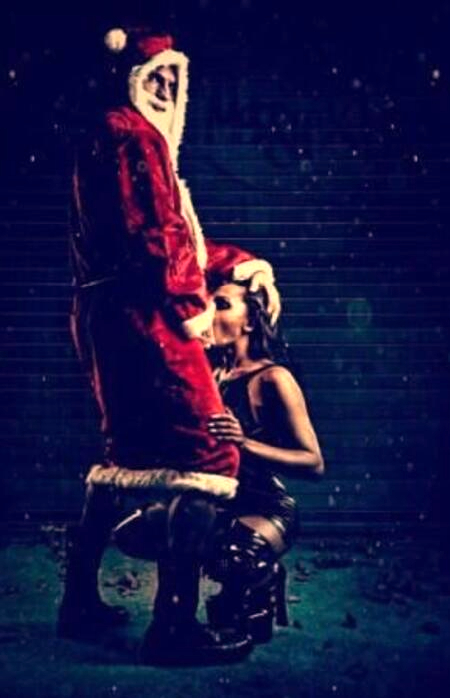 Christmas is a big event in England, after all, we invented it! It’s supposed to be a time for family, but there are usually some pretty wild parties as well. I disgraced myself one year by sucking off Santa at the local rugby club Christmas bash. And before you ask, no, I didn’t go down on him to get a better Christmas present!

Every year the club threw a big party. The early evening was for families, who’d take their kids home before it got ‘interesting’. The younger rugby players were a bit like American jocks. When they weren’t trampling on each other over a muddy field, they drank gallons of beer. A typical party would usually feature filthy drinking songs and outrageous drinking games.

That night they hired a special Santa and his Elves striptease act. The bar was full of drunken rugby players, girls from the local sixth-form college, and other female guests. When the strippers took to the small stage, there was loads of cheering and clapping. It was a great atmosphere and the Elves were in fact, hot girls. It was the first time I’d ever seen strippers and I made sure I was right at the front.

But little did I know I would soon be sucking off Santa!

The ‘Elves’ were soon down to their sexy underwear and were rubbing their bodies against a surprisingly muscular Santa.

The Elves stayed up on stage, well out of reach of the drunken rugger boys in the audience while Santa came down into the bar area and began to dance in front of the girls. He knew how to spot the sluts in the crowd and could guess exactly who was ready to rub baby oil all over him.

When it was my turn, I didn’t lick the cream off, I took Santa’s entire finger deep into my mouth.

As I sucked hard, I looked deep into his eyes. All the girls howled with laughter and I loved being the centre of attention. What I hadn’t bargained on was Santa spraying whipped cream all along the length of his hard cock. He stood in front of us with his hands on his hips, daring anybody to lick the cream off.  My pussy started to tingle when I realised I was going to be the one sucking off Santa.

My excuse is that I was drunk (I wasn’t) but I stepped forward and knelt in front of him. All my friends couldn’t believe what they were seeing as I grabbed his dick and slowly licked along the length of his shaft. I’d intended just to lick the cream off and jump back into the crowd. But when he ran his fingers through my hair and pushed his cock against my lips, I instinctively opened my mouth…

That was all it took… I was sucking off Santa!

Right there, in front of everyone!  And guess what? I didn’t give two hoots as I was loving being Santa’s slut.