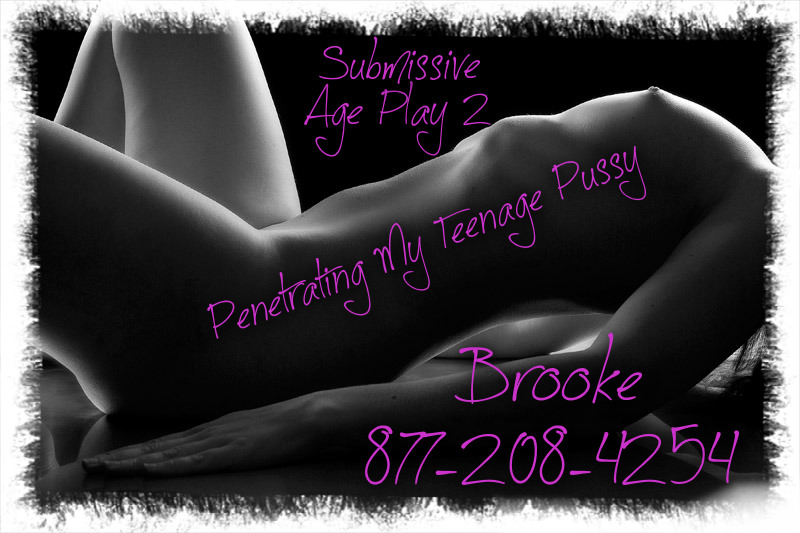 If you haven’t read it yet, you might want to click here to start with the first part of this story. It explains how my teenage self got involved with a man almost twice my age and started down the road to becoming his submissive. The next day was Friday so it was easy to come up with a plan on how to get a couple of hours alone with my sexy older man without anyone looking for me. He said he had a surprise for me and I couldn’t wait to see what he had planned. I told my parents that I was going over to my best friend’s house after work and spending the night with her.

I told her that I had to go home and do a couple of chores before I could come over. The day seemed to drag on and on but my anticipation continued to grow as the time got closer for me to meet up with him. We decided when we first started talking that we shouldn’t tell anyone at all about each other. I knew he could get into a lot of trouble for being with a teenage girl and I didn’t want that to happen so I didn’t even tell my best friend about him.

When I finally got off of work he was already waiting for me outside. His car was parked right next to mine so it wouldn’t be too obvious that I was getting into his car. I quickly climbed into his passenger seat, leaned over and gave him a kiss. He put his hand on the back of my head holding me in place as he deepened our kiss. I was a little breathless when we parted. He told me that he missed me and was really looking forward to tonight.

He started driving but didn’t tell me where we were going.

When we pulled up in a driveway I finally asked where we were. I was blown away when he told me it was his house. For as long as we had been talking we had never come here. The risk of him getting caught with me was too big so we never took the chance. I felt so happy that he was taking the chance of bringing me here like somehow it made us closer to actually sharing something more personal.

We pulled into the garage and he closed the door. The moment it was fully closed we both got out of the car and I waited for him to take the lead since I wasn’t sure where exactly we were going once we got inside. He took my hand and led me into his house. He didn’t even show me around as we made our way through to his bedroom. Once there he started kissing me deeply and running his hands all over my still-developing body.

He seemed so hungry for me.

I had never seen him this aggressive and I liked it. The control he had over me was unmistakable. Finally, he told me that he wanted to show me how good it would feel to “make love” to a real man and not a teenage boy. He wanted me to be in his bed when we did it for the first time. What I didn’t know was that he was using words like “making love” to get me more under his control than he already had me. Oh, how young and naïve I was.

He slowly undressed me placing little kisses on each part of my body as they became exposed to him.

Every touch felt like heaven. I closed my eyes and let my other senses take over. The feeling of his lips brushing against my naked skin sent tingles through my body. When he reached my panties and began to pull them down I became a little nervous but I didn’t protest. I wanted to make him happy. It seemed like everything he was doing was for me but I knew that it was making him happy as well. I could tell by the way he let out a soft moan as he uncovered my teenage pussy.

I was really nervous. I didn’t have any idea what to expect so when his mouth finally closed over my little nub I sucked in a deep breath.

As I took in that deep breath through my nose his unique scent filled my head and made my pussy flood with juices just like every other time I got around him. Just the smell of him mixed with his cologne had always been a huge turn-on for me. That only added to my heightened arousal as his tongue began to work its magic on my sweet pussy. My head fell backward, my long hair tickling my back as my mouth fell open allowing a soft moan to escape.

He added a finger to the mix and used that to actually move me back toward the bed. I didn’t even realize I was moving until the back of my legs connected with the edge of the bed. Gently, he lowered me down onto it and stripped me out of his clothes. His cock was already standing straight up. It made me even more excited to see the effect that I had on him.

He climbed on top of me, bent my legs and spread them apart.

His eyes were glued to my tight developing teenage body for what seemed like an eternity before he smiled and told me that I was perfect. I gave him a shy smile and thanked him. I knew what was coming next but never in my life had I expected it to feel as amazing as it did. He rubbed his cock up and down my wet folds coating himself in my juices before placing his head at my entrance. Pressing into me he had a strained look on his face as he slowly pulled back out. I thought something was wrong until he said that my pussy was so fucking tight! He pushed his cock back inside of me, this time going deeper. I was being stretched more than I had ever been and it honestly felt fucking amazing!!

He worked his cock in little by little going deeper with each thrust. By the time he was buried fully inside of me I was ready for more and he did not disappoint me. He continued pumping his big cock in and out of my teen pussy until I came all over him! It was the best experience of my life! I had never experienced an orgasm like that before. Sex felt good the couple of times that I had done it since losing my virginity but never anything like that!

Leaning down he gave me a quick kiss and then told me that there was so much more he wanted to show me but I had to get going.

I felt like he was trying to hurry me out of his house but I was still floating in bliss from having my first orgasm ever that I didn’t think much about it. As he drove me back to my car he told me to free up more time to spend with him because he had so much more planned for me. I wasn’t sure what exactly that was but after everything that had happened, I couldn’t wait to find out.

Stay tuned to see what this man almost twice my age had in mind for his little school girl sex toy!! You don’t HAVE to wait though…give me a call, I’d love to give you all the details of my future naughty encounters with him!!