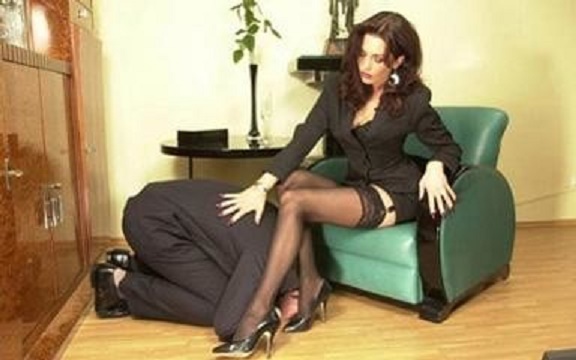 Lee is a submissive that I’ve been playing with for the last few months. He’s always so eager to please and I love giving him little assignments to do for me. I have a whole list of things for him to do and a punishment for each one if he fails to do them correctly. It’s so much fun when I see him and he proudly tells me what a good job he’s done. He’s like a little puppy.

Last week I gave a boring task to do to see if he would do it with his usual enthusiasm and he surprised me. I had ordered him to write a 5,000 word essay by hand on why men are better human beings when they are submissive. He knelt down, looked at the ground and handed it to me in a duo-tang. I opened it and found it neatly hand written in proper essay format. I went over to the sofa and sat down while he followed me by crawling on his hands on knees. He knelt by my feet and waited for my approval while I skimmed through it. He made a few good points and had obviously put thought into this. Good work deserves a reward and I know how much Lee enjoys public humiliation.

One of his next assignments would be catered to his desires so he’d know I appreciated his effort and obedience.

We went to a local store, one of those big box types that sell everything, and I handed him a list. He had to buy everything on it and if anyone showed interest in him or what he was buying he’d have to tell them he was shopping for Mommy. I grabbed a basket and followed a short distance behind him, making sure he did what I wanted. He went to the toy aisle and picked out a big brown teddy bear with a red bow around it’s neck. He carried it on his hip then went to the pharmacy area.

He went up to the pharmacist and asked him for some help, he’d been wetting the bed lately and his Mommy thought it would be a good idea if he bought some adult diapers for bedtime. The pharmacist looked at him, probably wondering if this guy was serious or not. Lee stood there waiting and the pharmacist gave up. He took Lee to an aisle and handed him a package of adult diapers. Lee thanked him then went and got a bottle of lube.

He made a quick stop in the vegetable isle, picked up a cucumber then headed for the check out.

He put his items on the conveyor belt, a teddy bear, lube, diapers and a cucumber. What a combination. The female cashier picked up the teddy bear first and went “Aw, he’s so cute.” Lee looked back at me, saw me watching him and said “Yeah, Mommy’s letting me buy him with my allowance.” She looked at him, smiled awkwardly and said “Oh…okay.” She scanned the bear then noticed the other items for the first time. She scanned them one by one as her face got redder. I don’t know who was more embarrassed, her or Lee.

When we got to the car Lee said “Did I do a good job Mistress?” I turned to him and said “You did very good. Your assignment for this week will be to make me a video of you using all of those items.”

Hot Phone Sex is in your future!