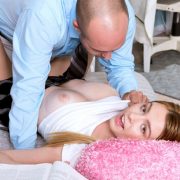 Student teacher sex adventures like these can really help a girl “flesh out” her education! First of all, you’ll want to know what happened in Part 1 of this sordid little story, right? Click on the bold text to check out my student teacher phone sex stories!

When we ended last time, Angel had agreed to meet with Professor Ben Wilson for tutoring in his sex therapy education class. She arrived a few minutes early, ready and excited to learn.

Sitting in front of his desk in her school uniform, she realized her panties were just the tiniest bit damp.

Nonetheless, she managed to shove that unsettling thought out of her mind as her teacher began to speak. “Now, what I’m going to do is a little unconventional,” Dr. Wilson informed Angel. “However, this method will greatly assist your comprehension of the course matter. In fact, you’ll learn about the subject much more thoroughly this way. I’ve tried to teach you from the class materials, but with some students, it just isn’t as effective.”

“I’m going to teach you the basics of sex therapy,” her instructor continued. “When books fail, it’s time to get physical. It’s a perfectly acceptable secondary method to teaching any subject, Angel. It’s a practical approach, and it works every time.”

His tone abruptly changed. “Now, take off your clothes,” he ordered sternly.

Angel blinked in surprise. Stunned and sure she’d misheard him, she hesitated. Professor Wilson raised a brow. “Do you want me to report to your parents that you’re refusing to participate in tutoring, Angel? Eyes widening, she hurried to reassure him. After all, her parents would freak if she failed his class. “Of course not, Professor Wilson!” she said quickly, desperate to convince him. “But what are we going to do?”

As if she were a child begging for a treat, he impatiently commanded her to hurry up and strip. Because Angel obeyed so quickly, Ben was immediately turned on. In fact, he could barely control himself.

For years, he’d had to endure daily flirting and teasing from his female students, made worse by the subject matter he taught. As he watched her teen breasts pop out of her white bra and blouse, his cock swelled hard and hot, tingling at the tip. Teaching sex therapy to barely legal girls was highly frustrating, but it was time to get some satisfaction!

Student Teacher Sex Adventures: The professor suffered from a perpetually-aching cock every single day, but had no way of finding an outlet for his horniness. Until now.

At last, in this naive yet mind-blowingly sexy girl, he’d found a solution. Indeed, he’d found a potential release. Angel looked at him expectantly from across the desk. Ben smiled to himself as he realized she really had no idea. Yet.

Little did she know, Ben planned to take her virginity. Furthermore, she’d thank him afterward for helping her improve her class performance. Suddenly, he realized his plan would work, since she still considered him a helpful, kind, considerate teacher. An expensive Oriental rug covered the floor of Ben’s office. He directed Angel to sit down on the plush, crimson pile. She did what he asked, leaning back on her elbows.

Mmm, almost there now, Professor Wilson smiled to himself.

Although part of him wanted to tear everything off, he forced himself to slow down and savor the moment. After removing his blazer, he unbuttoned his shirt. Then, he unfastened his trousers, carelessly allowing them to hit the floor. At the same time, Angel calmly watched him, looking eager to learn and seeming completely unworried.

As she reclined on the rug, deliciously naked, it was all he could do not to ravish her on the spot. Instead, he slowly removed his boxer briefs, allowing his engorged, thickly-veined cock to proudly spring free. He told her to remember back to yesterday’s lesson, stating “This is a man’s penis” as he began to point out each part.

Although Angel began to look somewhat frightened at this rather large, exposed part of his anatomy, she attempted to focus as he continued to instruct her. Kneeling down opposite her, Ben gently moved her toned young thighs apart.

“Lay back and spread wide for me,” he instructed. “Now, pay close attention, Angel. This part of the lesson is VERY important.”

Want to hear more about Angel’s sordid student teacher sex adventures? Even more, are you craving extreme role play with absolutely NO limits?