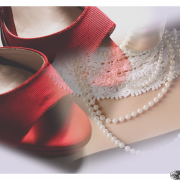 String of Pearls – What the Hell is in My Shoe?

“What the Fuck,” Rachelle yelled.  “This is the second time this week I have found this thick, wet, white creamy stuff in my shoe, my favorite red heels, at that.  First, it was the left shoe; today, it was the right!

“What’s wrong?” said Rosie as she ran into the room after hearing Rachelle yelling.

“I’m trying to get ready for work. I tried to put on my favorite red heels, and I found this mucus-like substance in my shoe.”  “This is not the first time this has happened.”  The String of Pearls Stroker has struck again . . .

Rachelle interrupts, “Okay, Rosie, I got it! Why is there man sauce in my favorite red high heel shoe?”

Rachelle and Rosie were late 20-somethings living in California.  They were college roommates, and after graduation, they decided to continue living together.  Neither of them was in a serious relationship.  Rachelle and Rosie partied and got freaky a lot, but nothing serious.  They were trying to focus on their careers before they looked for a long-term relationship.  Rosie was a therapist that worked at the federal prison. Rachelle is an educator who teaches high school and is also getting a dual master’s degree in Education and Biochemistry.

The Second Encounter with a Few Million Semen . . .

After a long week, Rosie decided to blow off some steam at a friend’s house on Saturday night.  She liked to get nasty from time to time with no strings attached, even though she was not in a committed relationship.  She sometimes liked to call the phone sex hotline to have a sexy queen talk dirty to her.

When she got home, she was so tired that she dropped everything and just passed out on the couch.  The next morning, she stumbled into her bedroom to get ready for a shower; she was going to meet some friends for brunch.  She put on her robe with one eye open, but she realized that she could not put on her slippers because there was something in one of them.

Rachelle, still partially asleep, said, “Rosie, we when over this last week.  NO ONE busted their load in my shoe.  Are you still on this?”

String of pearls – The Take-Down

Rosie and Rachelle continued to discuss this as they got ready to go out for brunch.  Neither woman had been in a committed relationship for quite some time, so this meant that there were no men in their apartment recently.  Someone had to be breaking into their apartment to leave these presents of slime! When and how, and why?

Rachelle and Rosie decided to get cameras installed in their apartment to catch the pearl stroker with cock in hand.  Almost three months had gone by . . . . Rachelle was in Rosie’s room watching a movie when all of a sudden they heard a noise coming from Rachelle’s room.

Stay tuned for part two of my String of Pearls Stroker blog. In the meantime, check out my sexy blog about how to have a meaningful girlfriend experience with me.