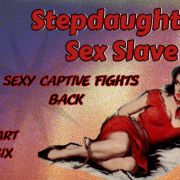 He knew that I didn’t really like him or want him. And that he was having to force me to allow him or his cock anywhere near me. I thought, “what if I try to be nice to him and make him think that I like him and I’m enjoying all of the sick things he was doing to me?”

But, as horrible of a person as I always had been, it would have been hard to make him believe me. He was probably already expecting me to try that tactic.

So, I needed to come up with some compliments that he might actually believe.

It had been a long and mostly sleepless night. I had almost gotten used to being nude all of the time. This wasn’t really surprising since I usually walked around the house half-naked in front of him anyway.

I had seen him adjust the thermostat before he left the night before. He had undoubtedly noticed me shivering on the floor, and I assumed that he had lowered the temperature to torture me further.

So, I was surprised to feel the room warming up instead of the blast of cold air that I had been bracing for. That seemed to have been a small kindness, which was a perfect sign. A weakness that I could exploit. Despite his anger and obvious sociopathic tendencies, he still seemed to care a little bit about me. And I had spent most of the night coming up with ways to do that.

I needed to build upon this tiny vulnerability and remind him that at one time, he cared about his stepdaughter sex slave. And then to gradually earn his trust and make him think that I liked him and could be trusted. And the most challenging part – making him believe that I had realized that I loved him and wanted nothing more than to please him in any way that he wanted.

Wisely, I had used all of those hours I spent not sleeping very wisely.

I came up with several tactics that I could use to manipulate him:

I could start with his big cock. Being a man, he would surely love to get compliments about his dick. And, I’m not gonna lie, it was a lovely package. I could tell him that being so thick and long made it feel amazing. So much better than any other guy I had ever been with. But what else?

I could remind him that at one time, he was just my stepdad. Before, I made him into a stepfather pay pig and when he was almost a father figure to me. He wasn’t, obviously – I saw him more like a living ATM.

I could even ask about Mom and remind him that we were once a little family (we weren’t). Calling him “Dad” might be helpful too. I can be a good actor – especially when my freedom and possibly my life were on the line.

I could also make him think that I was enjoying the opportunity to spend time with him and try to get to know him better.  Knowing very little about his past, his job, or his hobbies and interests, I could ask him about his day, his work, and what plans he had for the weekend. Just making small talk could be helpful. I hoped.

Stepdaughter sex slave had to make him believe that he had changed her.

I could apologize for how I had treated him. Tell him I’ve learned my lesson and that he’s changed his stepdaughter sex slave for the better. And that I would never take advantage of him or any men again. Possibly, even thanking him for going to the trouble of trying to teach me humility and make me a better woman.

Now that Stepdaughter has a plan let’s hope she has a chance to put it into action!