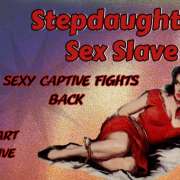 It was still hard to believe that he could do something like this. He had never once even stood up to my mother or me. We both used him and took advantage of him with no consequences at all until now. Finally, he was finished. I cringed as I felt each spurt from his cock deep inside of me. And I dreaded feeling it drip slowly back out.

Once he was finished using my tight hole, he pulled out as quickly as he had entered. I was relieved that I was no longer feeling the pain of his surprisingly large cock stretching me out. But that didn’t last long. Right away, he shoved a huge butt plug into my ass that was much more painful than his cock.

It was more than I could take

As much as I didn’t want to, I started crying and begging him to take it out. I promised that I would do absolutely anything else he wanted. But he didn’t even acknowledge that he heard me at all. He was busy putting his torture devices away in his cabinet of horrors and adjusting a camera on the wall. He then checked all of my restraints and left the room.

I heard two doors close and lock, and then there was just silence. There was just enough light for the camera to record me, which I was grateful for. The dark terrified me. I was sure that I would not sleep that night. The stretching from the plug, along with the earlier relentless ass pounding, was causing a throbbing pain deep inside me.

I also had no idea how long this could last. Or what else he had planned for his stepdaughter sex slave. I lay there in pain, scared, and with no idea what to do.  And I started crying again, even though he wasn’t even there to see me. I realized then that I needed to get it together.

This was much more complicated.

I was not a meek girl who just cried and didn’t fight back. I had had plenty of awful boyfriends, and I stood up to all of them. Getting away from them was not a problem. This was much more complicated, of course. I was restrained, locked in, and being held captive by a sociopath. One advantage, though, was that I knew this kidnapper. And for a brief time, he was my stepfather pay pig.

I had control over him once, and maybe I could do it again. It wasn’t a great plan, really, but it was my only option. Escape on my own was extremely unlikely. I thought about how I had treated him. And how it clearly made him hate me and want to hurt me. What he really wanted, then, was for me to be nice to him, pay attention to him, and willingly have sex with him.

He had two of those things now. He certainly had my attention. 100% of my focus right now was on him. And he could have my body that he wanted so badly whenever he wanted. But he knew that I didn’t really like him or want him. And that he had to force me to allow him or his cock anywhere near me.

I thought, what if I gave him the last of those three things? I could be nice to him and make him think that I liked him and was enjoying fucking him. But, as horrible of a person as I always had been, it would have been hard to make him believe me. He was probably already expecting me to try that tactic.

So, I tried to come up with some compliments that he might believe. I could start with his big cock. Being a man, he would surely love to hear about his cock. I could tell him that being so thick and long that it felt amazing. So much better than any other guy I had been with. But what else?