My Stepbrother Wanted More Than Just a Goodbye ♕ 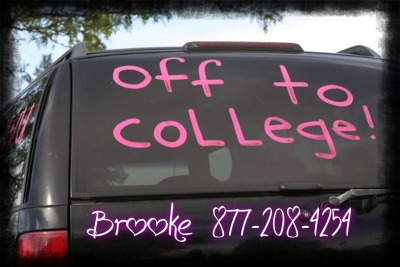 My stepbrother made my trip to college very memorable!

I was 15 when my mom got remarried. I was pretty pissed about it but when my new stepfather and stepbrother moved into our house those feelings changed pretty quickly. The moment I laid eyes on my new stepbrother, Peter, some very different feelings took over. Heat flooded my body in a way that I had never felt before.

He was only a year older than me but being in football for years gave him a build that you would normally see on a man in college. Peter was over 6’ tall already and had everything else to go along with his toned, sexy body. I knew that it was wrong for me to be this attracted to my stepbrother but I couldn’t help it! The flirting started the moment we made eye contact and never stopped. Over time the flirting became less and less innocent.

We came very close to fucking a few times but I always stopped him. It didn’t matter how attracted we were to each other, I just couldn’t bring myself to have sex with my stepbrother. Besides that, I had remained a virgin throughout high school. The only time I really came close was with Peter. I had boyfriends but I made it clear that I wanted to wait and they never pushed. Peter was pretty protective of me anyway so I don’t think I would have been able to do it if I wanted to.

After my graduation we planned my trip to college. My mom was busy with work and wasn’t able to take off so my stepdad and stepbrother decided they would take me. Unfortunately all we had was the family sedan and once we filled it with all of my things there as only room for two people. Peter said that I could just sit on his lap. My stepdad started to protest but Peter pointed out that we didn’t have much of a choice. The college was almost three hours away, we needed both of them to unload everything and this was our only car.

Peter sat down in the passenger seat and patted his lap with a devilish look on his face. How bad could this really be? My stepdad was right next to us driving the car. But when I sat down in his lap I noticed that there was so much stuff in the car that it came up through the seats and blocked most of our view of the driver’s side. Peter rested his arms around me as we drove. It wasn’t even 10 minutes into the drive and he was tracing circles on my bare leg moving them slowly up my sundress. I turned and gave him the “stop it” look but he just smiled and continued doing what he wanted.

We stopped for gas and when his dad went inside I told him to behave. His dad was right next to us in the car! He laughed and said he’d never know. He pointed out that there was too much stuff between us so he couldn’t even see. Besides that, his dad was a very focused driver. When he came back out from the store we all piled back in and got back on the road. This time Peter’s hand went straight to my bare thigh and started to inch closer to my panty covered pussy. Running his fingers up and down the thin material made me crazy and he could feel the evidence when my pussy started to moisten my panties.

Just how far was my stepbrother actually going to go?! How far would I let him go? With my stepdad right there, for sure it wasn’t going to get THAT far!! But I guess you’ll have to stay tuned for part two to know for sure!!! Or just give me a call, I’ll tell you all about it!