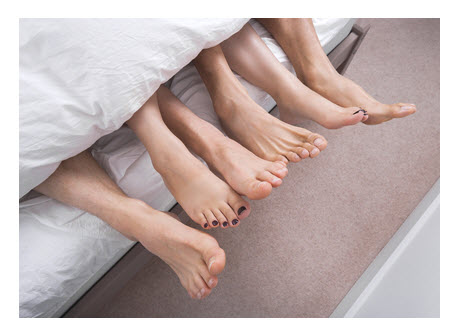 A Steamy Amateur Cuckold Sex Story And We Didn’t Even Know! I come from a close-knit family and I used to see my mother and Aunt Kim at least once a week before I moved to MI. I guess if you didn’t know, it would be nice of me to tell you I am from FL. I’ve been keeping my double life a secret from them, but when we were having one of our girly get-togethers, my mother mentioned the cute young college boy she hired to help her around the house. Christian sounded so hot and I said I’d love to bang a guy like that. They made jokes about me being a naughty little slut and at that moment, they realized I wasn’t the innocent girl they thought I was.

My mother got a naughty look in her eyes and told us to come over on the following Saturday. Aunt Kim and I went to my parent’s house and had a couple of drinks on the back porch, while we watched Christian. We watched him mow the lawn with his shirt off and jeans that fit JUST right. Sweat glistened on his hot body and I knew he was getting us all turned on. When he was done my mother asked him to come inside for a nice cold brew and the four of us went in after.

Then, my mother held his arm and told him he must work out a lot, as he drank his beer. He blushed as Aunt Kim and I touched him too. He seemed nervous and my mother said “Why don’t we go upstairs and have some fun Christian? It’s not like you haven’t made us hot and bothered!” He didn’t get a chance to answer, because the three of us nudged him up to the bedroom. How could he resist? My mother looks exactly like me, but with blonde hair, dreamy blue eyes and bigger tits. My Aunt Kim looks like a combo of both of us, but VERY petite. little spinner she is!

I “shyly” undid his jeans, a bit of fear in me as I did this in front of my family, but his big dick made those nerves go away. He was only starting to get hard, but he was long and thick. Just the way I like em! He kicked his jeans and boxers off, as I gave his dick a few strokes. My mother and Aunt Kim got undressed. I let them have some fun with him, as I took my clothes off and a rush went through me. They pushed him down on the bed. My pussy got wet as Mama and Aunt Judy played with him, kissing him and jerking his dick up and down.

We watched, as she grabbed him by the hair and made him get on his knees while she laid down. She shoved his head down into her pussy and held him there as he ate her juicy pussy, making her groan and cry out. Her back arched off the bed, as she shook and after a few minutes she let out a scream and came so fucking hard. She let him go and he moved away from her with pussy juices all over his face.

I was in the mood to go again and thought I’d never get enough of him. I’ve never had this much fun, with my mother and Aunt before, but I wanted it to last! Just as I was about to sit on my perch again, mind you Christian hadn’t cum yet at this point, I looked up and there in the doorway was my…… Who do you think was standing there? Who do you think was standing there with his cock in his hand jerking it? We were cuckolding him and didn’t even know it. Do you like first-time sex stories?