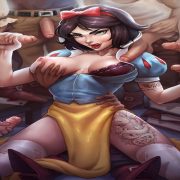 Time to get gang banged seven dwarves style! Snow White had to take refuge in this cute little cottage. In it were seven little beds, but the occupants were gone. If only Snow White knew that she was about to get gang banged seven dwarves. She found the bath and decided that a nice hot bath was in order after having to escape her evil stepmother. For once Snow White felt like she could relax. She stripped off her clothes and slowly lowered her naked body into the hot water.

She must have dozed off in the tub because when she woke up there were seven dwarves around the tub staring at her naked body. Startled she jumped up to cover her naked body. But it was too late. The seven dwarves got to see every inch of her naked body. And they loved what they saw. Her pale porcelain skin glistened with the water, their eyes trailing over her body, to her perfect tits all the way to her pussy.

She had to admit that the hungry look in their eyes made her pussy twitch with excitement. One of them brought her a towel for her to cover up with and they told her to come to the small living room so they could figure out who she was. Once she was alone she hurriedly dried off and put on her clothes. Heading to the living room she could feel her heart race.

Snow White Was about to get gang banged seven dwarves!

They started to question her, wanting to know who she was and why she was her. So she told them everything. About running from the evil queen, how the huntsman was sent to kill her and how she was just trying to find a safe place for her to stay. The seven of them huddled together and started talking. They seemed to all reach an agreement and turned to her.

She hated to admit it but it really turned her on. To be on her knees sucking on their cocks and getting that yummy cream from their cocks. The more she sucked them off the more she wanted to know what it would feel like to get fucked. Her virgin pussy was really craving a cock to be in it. So she finally told them that she wanted to get fucked by them all and they were more than happy to comply.

It was time for Snow White to become not so pure.

Want to have some hot fairy tale fantasy sex? Well, come be my big bad wolf to my little red riding hood or maybe my naughty prince charming coming to awaken my inner slut!